The Smithsonian Castle looks like it should housing exotic treasures. But it doesn’t really–at least, not many and not any more. The Smithsonian now sprawls across 19 different facilities, but this is the original building. 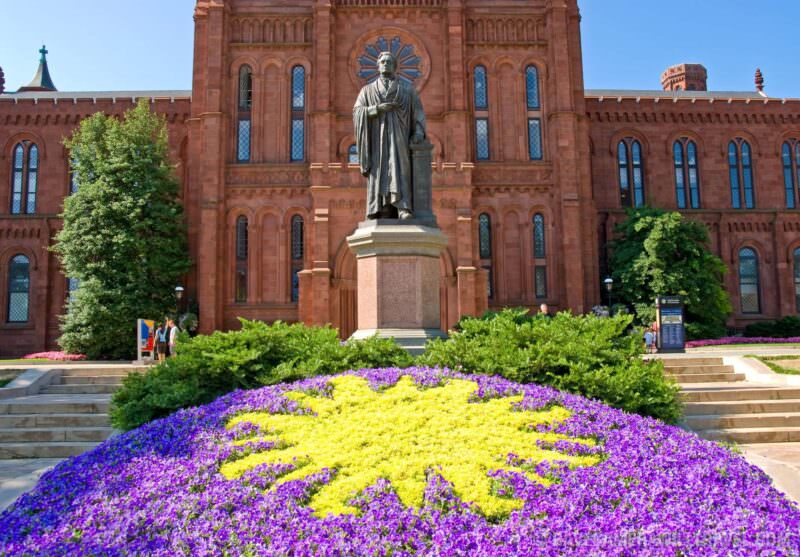 The Smithsonian Castle looks like it should be housing exotic treasures. But it doesn’t really–at least, not many and not any more. The Smithsonian now sprawls across 19 different facilities, but this is the original building. And as you enter through the Mall entrance, you’ll pass the crypt of James Smithson, the institution’s founder, on your left.

The Smithsonian Castle closed to visitors in February 2023 at the start of a major renovation project scheduled to take five years.

There are some items on display there, especially in the West Wing, but for the most part the building serves as the administrative headquarters of the Smithsonian Institution.

It was completed in 1855 and designed by James Renwick Jr in a Gothic Revival style replete with the distinctive castle turrets. And research in recent years has revealed that its distinctive red bricks were quarried by slaves.

Photos of the Smithsonian Castle

How to Get to the Smithsonian Castle

The Smithsonian Castle sits directly on the southern side of the National Mall, in the heart of the cluster of other Smithsonian museums. The closest metro stop is Smithsonian (Orange and Blue lines); L’Enfant Place (Orange, Blue, Yellow, and Green lines) is only a couple of blocks away. Depending on the day of the week and time of day, there’s some on-street parking, but it’s best not to count on it.

Taking Photos at the Smithsonian Castle

There’s no problem using tripods or flash from the outside of the building. For a different angle, and some spectacular gardens, head around the back of the building to the Enid A. Haupt Gardens. A personal favorite is early spring when the magnificent saucer magnolias are in bloom. The gardens are closed at night.

Tripods aren’t allowed inside the building for the usual safety reasons, but flash is mostly allowed.