I took this photo last spring during the very brief blooming of the tulip magnolias (or saucer magnolias) in Washington DC. They’re one of the spring’s first dramatic blooming varieties in the DC area, usually beating the more famous cherry blossoms by a couple of weeks. 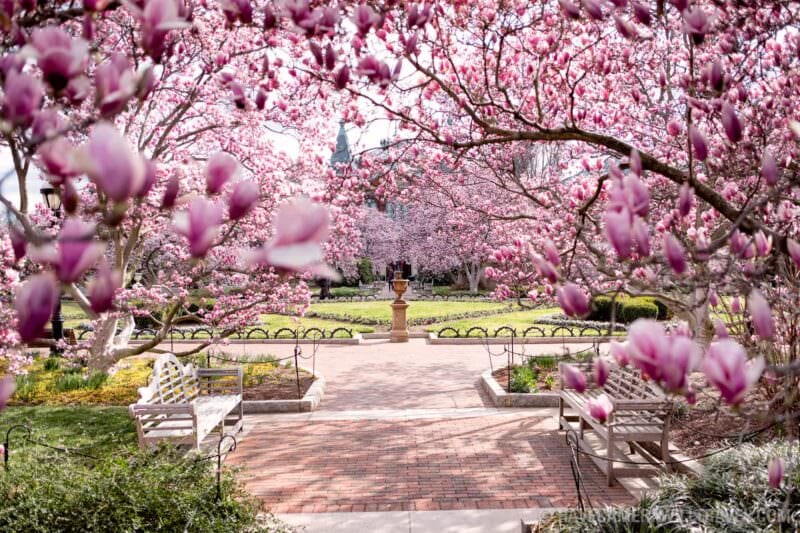 I took this photo last spring during the very brief blooming of the saucer magnolias (or tulip magnolias) in Washington DC. They’re one of the spring’s first dramatic blooming varieties in the DC area, usually beating the more famous cherry blossoms by a couple of weeks.

But this particular year they were gone suddenly and dramatically. An Arctic blast that sent overnight temperatures tumbling froze the flowers and burned them. Within 24 hours of when I took this photo they were all a brown shriveled mess.

There’s no particular magic with taking this photo. The thing I wanted to do with it was getting the camera up amongst the flowers to give that look of being immersed in the sea of flowers. I want it to be amongst the flowers, not sitting back and looking from afar. I also used a larger aperture with a shallow depth of field for that same reason. But tulip magnolias hang low, so it wasn’t hard in this case–I just held the Fujifilm X-Pro2 above my head to shoot.

Where This Photo was Taken

The garden is named after Enid A. Haupt, an American publisher and philanthropist who contributed $3 million to make the garden a reality. Hapt was renowned for her patronage of horticulture. She contributed to many other projects, including the Haupt Fountains in the Ellipse between the White House and Washington Monument.

There’s a huge variety of plants in the garden, but the tulip magnolias are one of the spring highlights in large part because of there are so many here so densely concentrated.

How This Photo Was Taken

I shot this with a FujiFilm X-Pro2 with a FujiFilm 23mm ƒ/2 R WR prime lens. The X-Pro2 has an APS-C sensor, so the 23mm lens on it is the equivalent focal length of 35mm on a full-frame camera, which makes for a mildly wide perspective with a lot of versatility. It was shot at ISO 200 at ƒ/2.8 at ¹⁄₁₅₀₀ sec. I also had a Nikon D810 with me and repeated the same shot with that, but I like this version from the FujiFilm a little better.

It was shot in RAW and processed in Lightroom.