The Smithsonian National Air and Space Museum’s Udvar-Hazy Center is an impressive and large addition to the museum’s exhibit space. 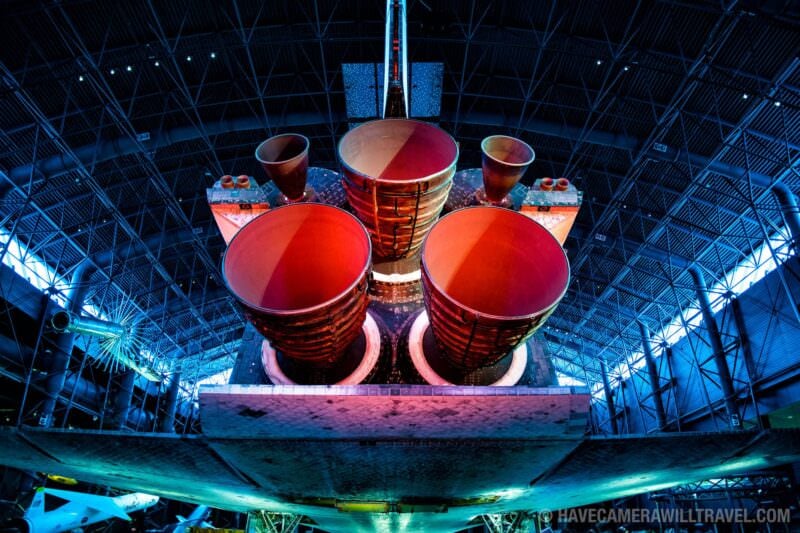 Opened in 2003, the new Stephen F. Udvar-Hazy Center at Chantilly near Dulles Airport is one of the two complexes of the Smithsonian National Air and Space Museum open to the public. It’s a new and impressive addition designed as a massive aircraft hangar and purpose-built to allow the museum to display the approximately 85 percent of its holdings that simply didn’t fit in the National Mall Building.

Because it’s a bit off the beaten track–about 30 miles from downtown DC–and harder to get to it doesn’t get the numbers of visitors of the main National Mall Building. But it is definitely worth the effort.

Highlights from civilian and military aviation and NASA’s space programs include the Space Shuttle Discovery, an SR-71 Blackbird spy plane, a Concord, and the Enola Gay, the B-29 bomber that dropped the atomic bomb on Hiroshima and that had caused so much controversy when originally displayed as part of an exhibit in the National Mall Building in the late 1990s.

I have a separate page with information on the National Mall Building.

The Udvar-Hazy Center is about 30 miles southwest of downtown Washington DC in Chantilly, right next to Dulles Airport.

As with most museums–especially busy ones–you can count on crowds, although it’s rarely as packed as the National Mall Building. The museum is free, doesn’t require reservations (except perhaps for large groups) and there are rarely queues to get in; if there are, it’s most likely just to pass through the security checkpoint. Once inside you can wander around at your own pace. See below about parking fees.

By far the most practical way to get there is by car, either driving yourself or by cab (which won’t be cheap). There’s ample parking for $15/car (free after 4 pm); there’s no additional entry fee to the museum itself. Eventually, there’ll be a metro line out to Dulles Airport, but that’s still being built and construction is running behind schedule.

And if you happen to have a long layover at Dulles Airport waiting for a connecting flight, the Udvar-Hazy Center makes for a very good way to kill time without the uncertainty of battling the interminable traffic to get to downtown DC.

In general, personal photography is allowed. Tripods and other standing supports are not allowed.

Much of the museum has fairly low lighting. There’s usually no problem using flash, although with such large items and big spaces there’s a limit to how effective it will be. Your bags will be searched entering the building and you’ll probably have to check any bags that are bigger than a typical walking-around bag.

You can find more of my photos of the Smithsonian National Air and Space Museum Udvar-Hazy Center here.