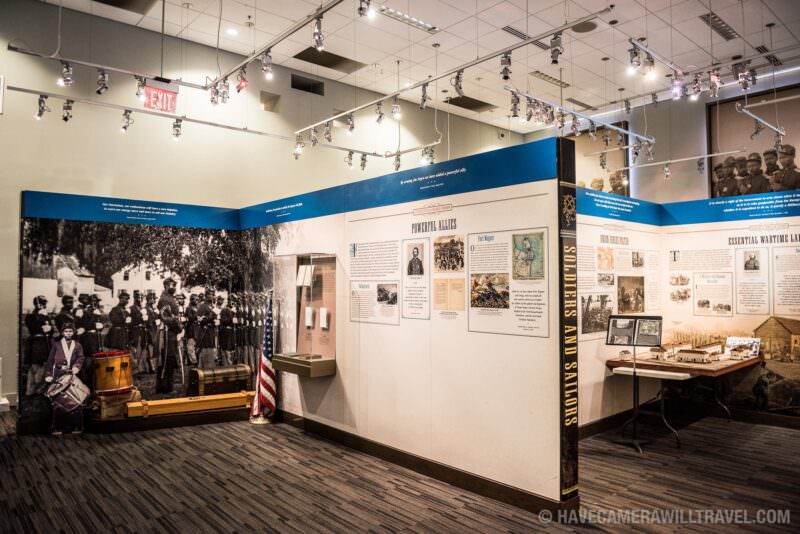 It’s a relatively small and recent museum and not especially well known–at least, not compared to the city’s world-famous museums a couple of miles down the road.1 But the story it tells is both important and unique, attempting to reinsert the history of the service of hundreds of thousands of soldiers of African American, hispanic, and European descent who served in the United States Colored Troops back into the broader story of the American Civil War. And we’re not talking about only a few soldiers. There were 209,145 members of the United States Colored Troops (their names are listed on the memorial across the street), so it’s a massive collective experience, and their involvement contributed to the course of the war to an extent that has often been under appreciated.

There are relatively few artifacts on display. Instead, the museum relies heavily only informational panels of text and illustrations. But the panels are unusually well done and have been created thoughtfully and with high production values, making them more engaging than simple walls of text.

What to Know Before You Go

It’s a relatively small museum, and you can comfortably take in inside an hour or two.

It’s located across the street from the African American Civil War Memorial in northwest Washington DC in the U Street neighborhood. Visiting that memorial is a natural complement to visiting the museum.

For hours and special events, consult the museum’s official website.

There is street parking nearby, but availability varies widely depending on time of day and even day of the week. A far more convenient option is to go by metro–an entrance to the U Street station is directly across the street, in the plaza for the memorial.