The Marine Corps Sunset Parades at the Iwo Jima Memorial are one of Washington DC’s summer treats. Here’s information and schedule on the 2021 season. 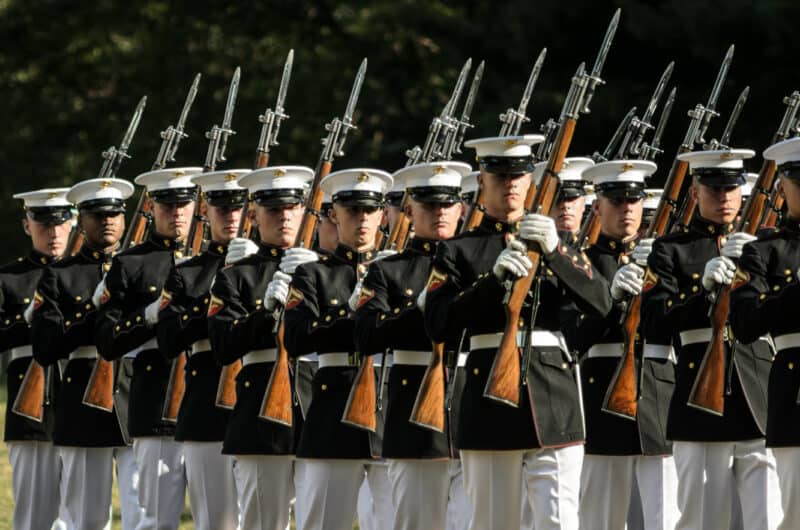 The Marine Corps Sunset Parade at the Iwo Jima Memorial is one of Washington’s many wonderful free events during the summer and well worth doing. It’s a great opportunity to see a world-class military ceremony and to show support for men and women in uniform.

The Marine Corps Sunset Parade has been a summer tradition since 1956. (Friday evening parades at the Marine Corps Barracks have been going on even longer). Its backdrop is a photo cast in 100 tons of bronze, based on the famous and controversial photo Raising the Flag on Iwo Jima by AP photographer Joe Rosenthal of the flag-raising on Mount Suribachi, and sculpted by Felix DeWeldon. Six men–5 Marines and 1 Navy corpsman–each standing 32 feet high, are raising the flag that flies on a 78-foot bronze flagpole. At the Memorial’s base are etched the tribute Fleet Admiral Chester W. Nimitz paid to the Marines at Iwo Jima: “Uncommon valor was a common virtue.”

The Iwo Jima Memorial was dedicated on November 10, 1954–the Marine Corps’ 179th birthday–with President Dwight Eisenhower and Vice President Richard Nixon in attendance. Three of the men depicted in the statue were also there; seated beside them in the front row were the mothers of the three other men who had died in the battle. Seven thousand people turned out for the ceremony.1

The Sunset Parades are one of several regular military parades in the DC region during the summer. The Marine Corps’ famed Silent Drill Team is a highlight, but the parade also features The Marine Drum and Bugle Corps, also known as the Commandant’s Own. You can see some photos of the parades and find more information here.

The parade takes place on Tuesday evenings through the late spring and summer. As its name suggests, the Sunset Parade starts in daylight and ends in twilight or, later in the season, in the dark. This is the schedule for the 2021 season. They are all taking place at the Iwo Jima Memorial.

Please note that it’s an outdoor event and is highly contingent on the weather. Evening thunderstorms are common in DC in the summer, and there aren’t any makeup parades for ones that are canceled. Please also note that while I confirm this schedule directly, it is possible for it to change (you can confirm here).

If Tuesday evenings don’t work for you, there’s also a Friday night parade at the Marine Corps Barracks Washington at 8th and I. They also have a longer season, so they might also work better if you’re visiting in the weeks before or after the Sunset Parades begin. You can find more information here. Please note that the Friday night parades require tickets (the Tuesday night parades do not require tickets). Another excellent option, on Wednesday and some Thursday evenings, is the U.S. Army Twilight Tattoo.

Tickets to the 2021 Sunset Parades

No tickets or reservations are required. It’s free! General seating is on a first-come, first-served basis.

I have separate posts with more photos and information on the Sunset Parades, the Iwo Jima Memorial, and the Lincoln Memorial.

US Marine Drum and Bugle Corps

More traditional than the high school and college drumline marching bands that have come into vogue in recent decades, and resplendent in bright red dress uniforms, the US Marine Drum and Bugle Corps leads off with a medley of various military standards and crowd-pleasing, family-friendly popular songs. The Corps has been historically known as the “Commandant’s Own” to distinguish it from the separate “President’s Own.” 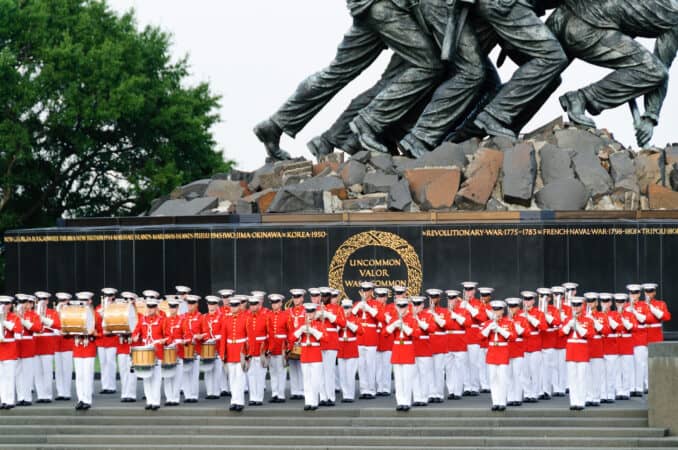 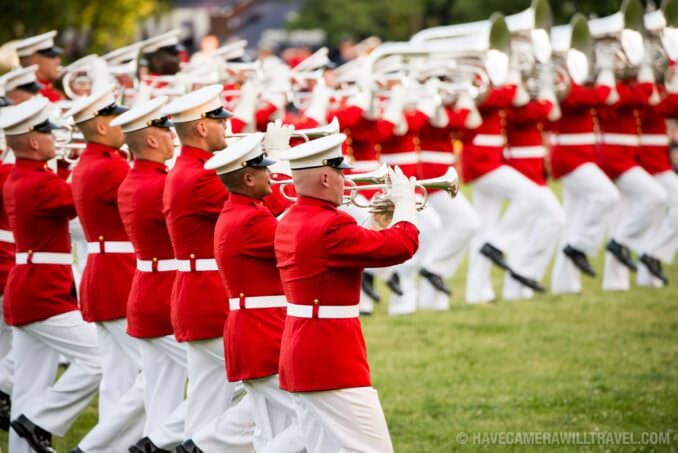 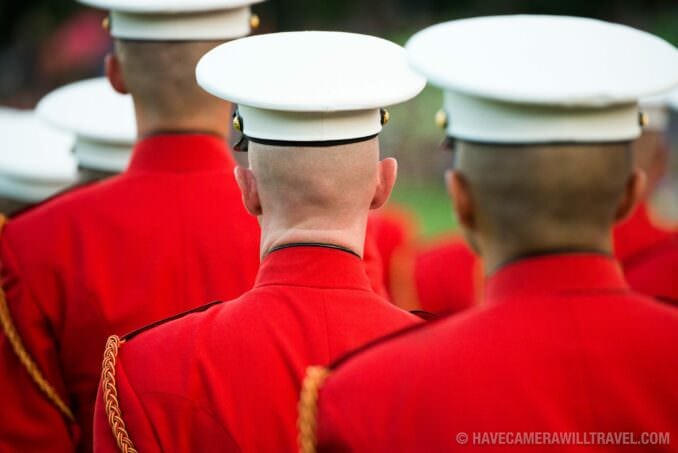 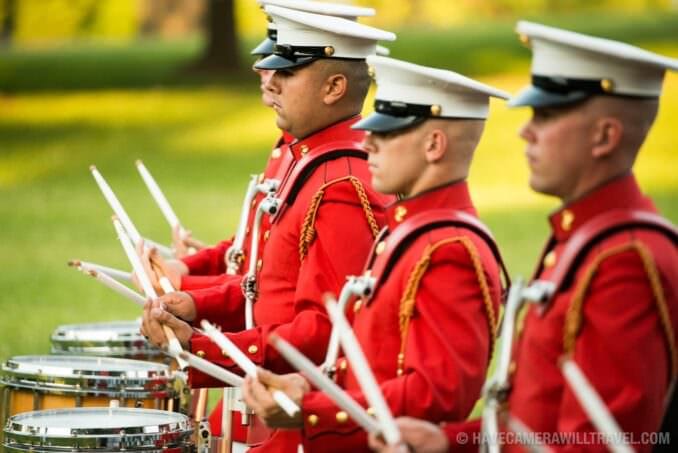 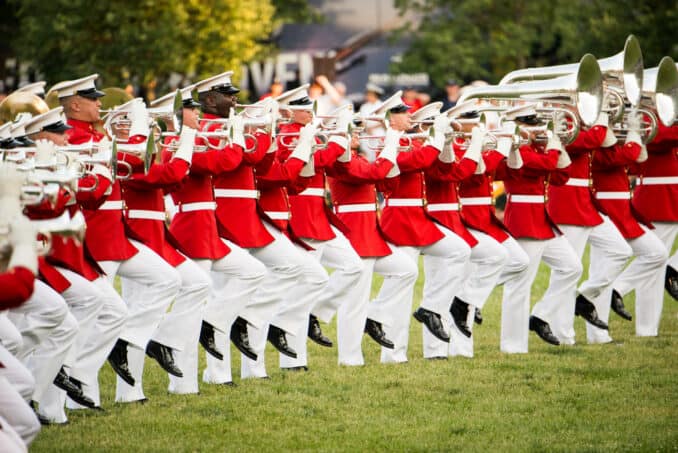 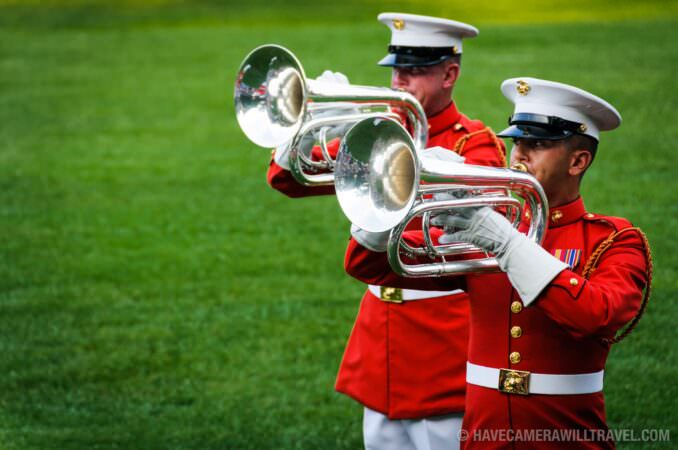 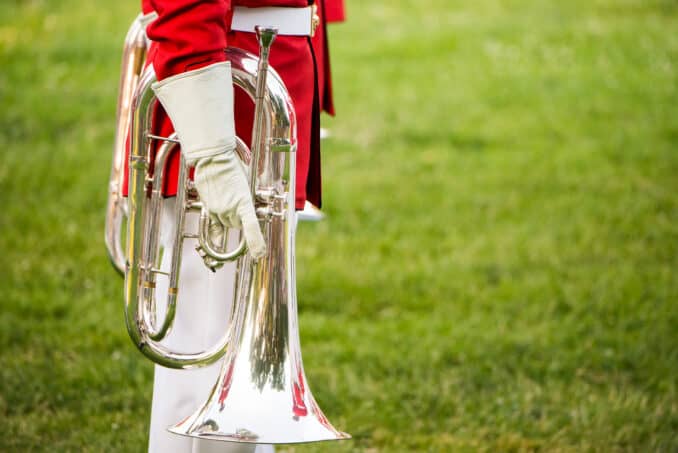 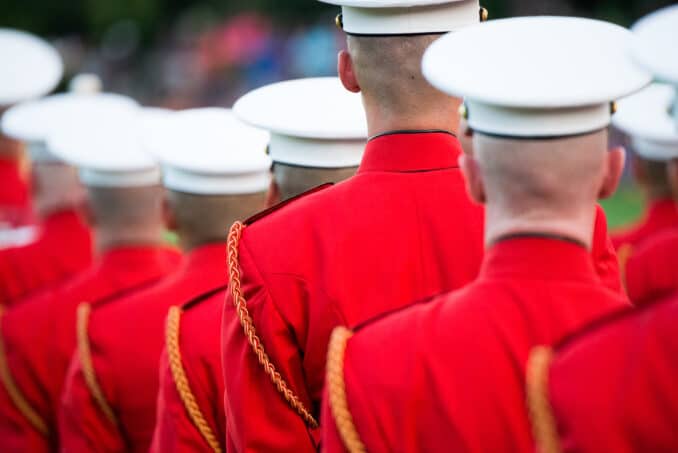 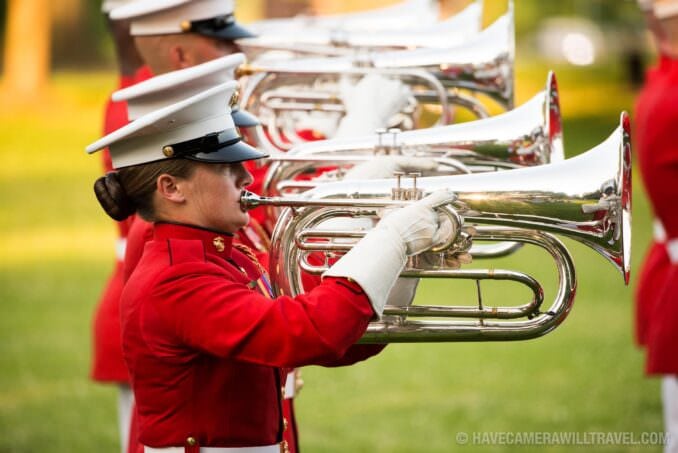 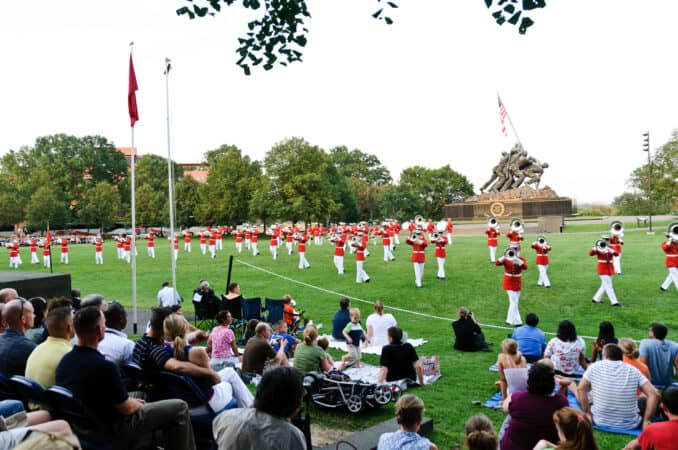 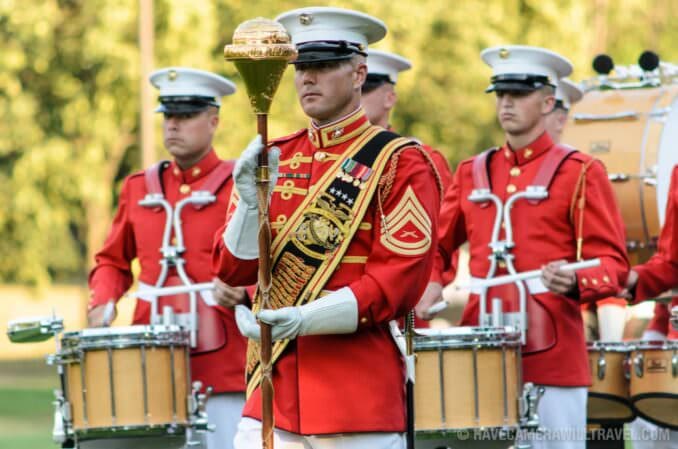 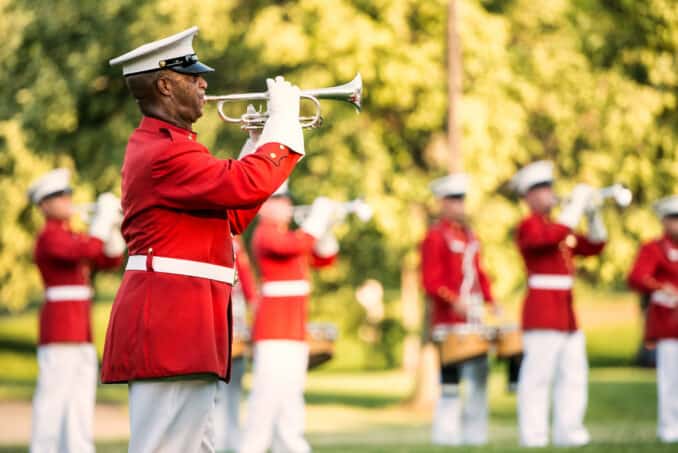 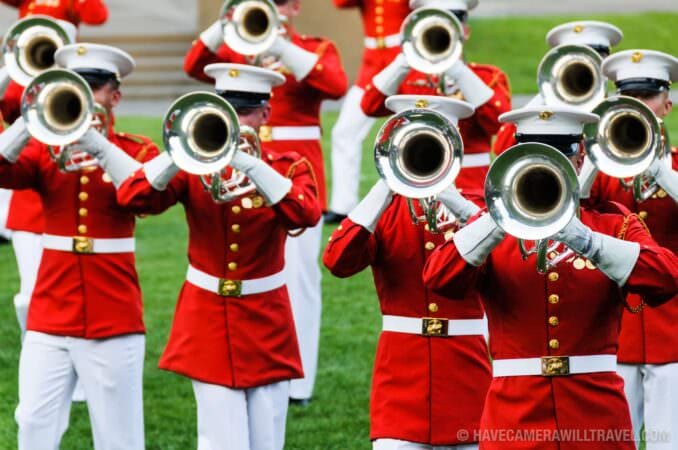 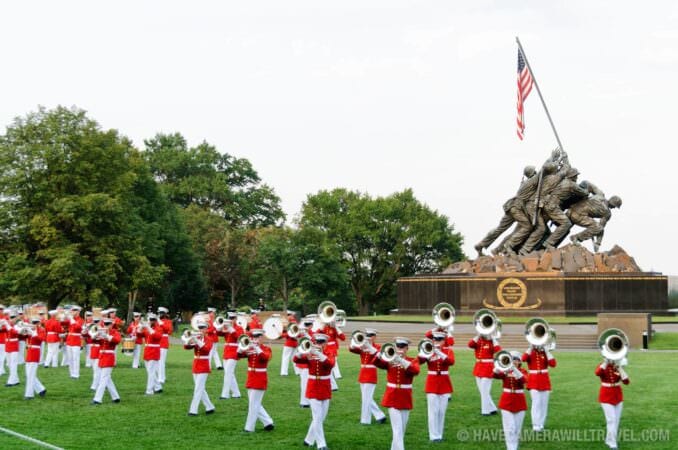 The musical portion is followed by the stark and impressive silence of the Silent Drill Platoon, a 24-man precision exhibition drill team working with 10-pound M1 rifles tipped with fixed bayonets. Working without any audible cues, the Platoon works through a routine of formations and maneuvers that often involve bayonets flying through the air. It’s impressive stuff–all the more so since they’re doing it as the light is fading. 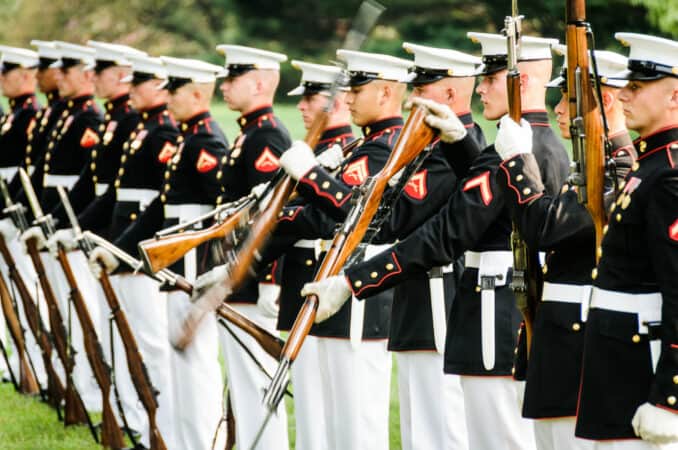 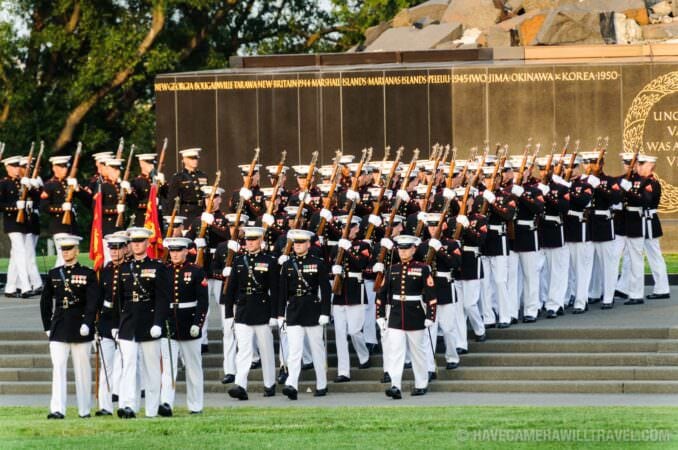 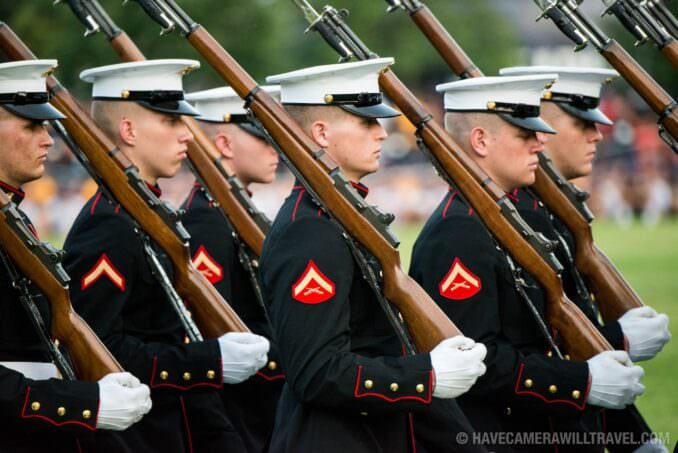 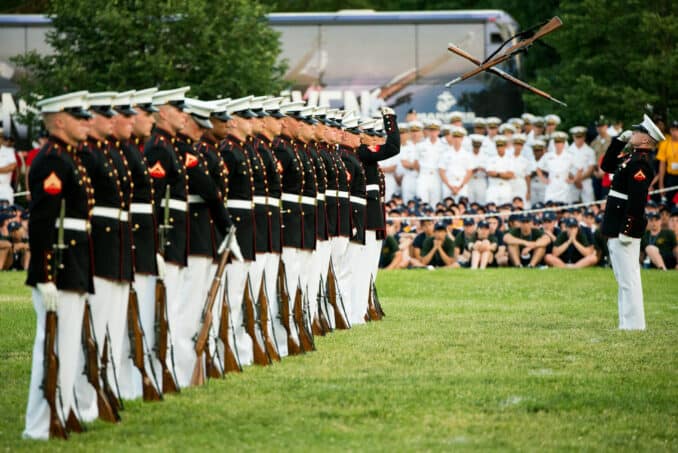 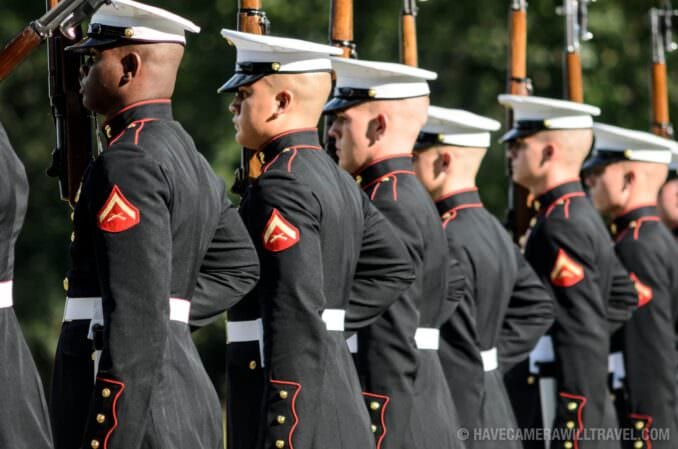 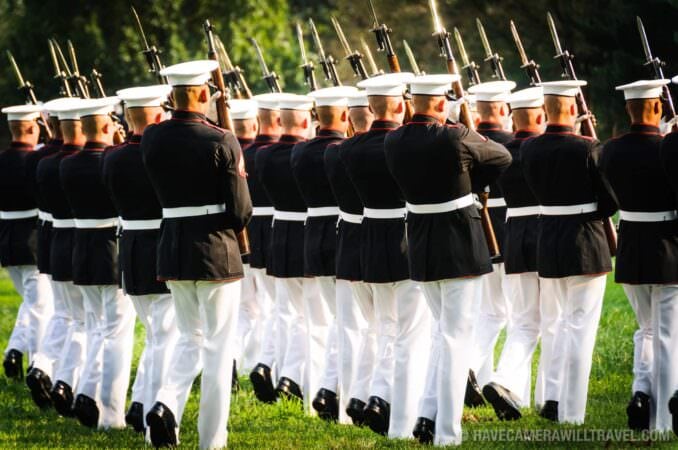 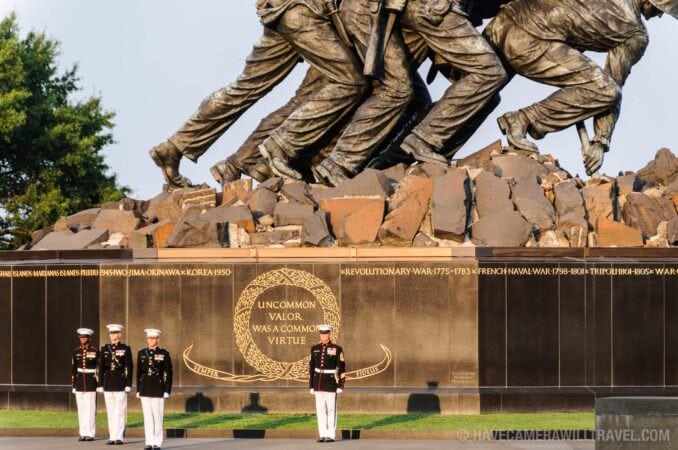 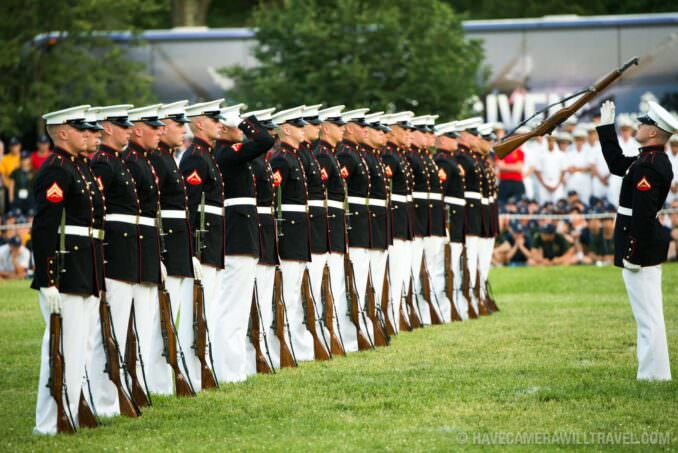 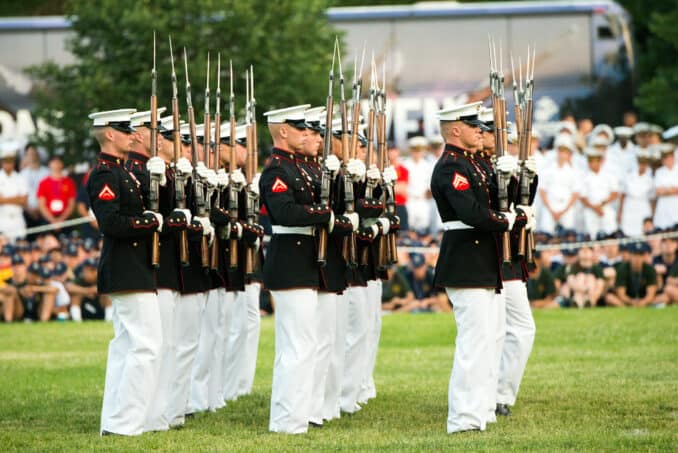 How to Get to the Iwo Jima Memorial

The parking spots within the grounds of the memorial itself are off-limits to the public on ceremony evenings, although there is some parking on the street in the neighborhood around the Iwo Jima Memorial, you’d best get there well before the parade to get a parking spot. A better bet is to park at the Arlington National Cemetery (for a small fee) and ride the free shuttle bus from the Visitors’ Center to the Iwo Jima Memorial.  The nearest Metro stations are either the Rosslyn stop on the Blue/Orange line or Arlington National Cemetery stop on the Blue line. It’s about a 10-minute walk from both–the walk from and through Arlington National Cemetery is more scenic (or you can ride the shuttle bus). (Tip: The Washington Metro Trip Planner is very handy if you’re not familiar with the area’s metro lines.)

Because of a long-standing dispute related to choosing a site for the Air Force Memorial, the only bathroom facilities at the Iwo Jima Memorial have consisted of an unsightly row of porta-potties nearby. Now Congress has finally (!) authorized the construction of permanent bathroom facilities. No word yet on when they’ll actually be built.

There are some seats, but they are set aside for invited guests of the parade reviewing officials. A much better bet–and more fun–is to take a picnic blanket (and picnic) or lawn chairs and choose a spot on the grass–there’s plenty of room. (If you do a picnic, be prepared to take your trash out with you. The NPS has removed most of the trash cans from the park around the Iwo Jima Memorial.)

There’s little nearby cover for rain, although a grove of trees offers a little protection against light rain showers. But evening thunderstorms can be common in the Washington area in the summer, particularly in July and August, and there’s no safe cover if a storm rolls through. (Here are some tips from the National Weather Service if you do get caught outdoors during a lightning storm.)

The performance lasts roughly an hour and a quarter.

While there aren’t many restrictions on what you’re allowed to do, as such, there are some factors that make it a challenging event to shoot. By mid-way through the parade, the light is typically fading. It’s hard to move around to a new vantage point without disturbing others. And much of the parade occurs quite a distance away in the middle of a field.

Photography is permitted for the duration of the parade. The light is very low by the end of the ceremony, particularly in August, so it can be hard to get sharp photos towards the end. I’d recommend taking a longish telephoto (200mm+) if possible, since much of the action happens across a field (not such a bad thing with all that sharp steel flying around!). A monopod or tripod will help get sharp images with the combination of fading light and a long telephoto lens.

While flash is technically possible, especially with the modern zoom flashes that can project an incredibly long way, it’s probably not recommended for the portion of the show for which it would be most useful—the USMC Silent Drill Team—since it would pose a potentially dangerous distraction to the Marines who are throwing heavy guns and bayonets around in precision drills. And be aware that many in the audience are veterans and families of servicemen and servicewomen—and the midst of several hundred Marines is not the best place to cause a commotion in an effort to get just the right shot—so please be considerate of others if you have to move around to get a different angle.

More Photos of the Sunset Parade at the Iwo Jima Memorial

I have more photos of the Marine Corps Sunset Parade here.

Another public military even worth checking out is the Army Twilight Tattoo.