The US Army’s Twilight Tattoo is one of the more exuberant military performances in the DC area. It plays on Wednesday and Thursday evenings in the summer. Here’s the 2019 schedule. 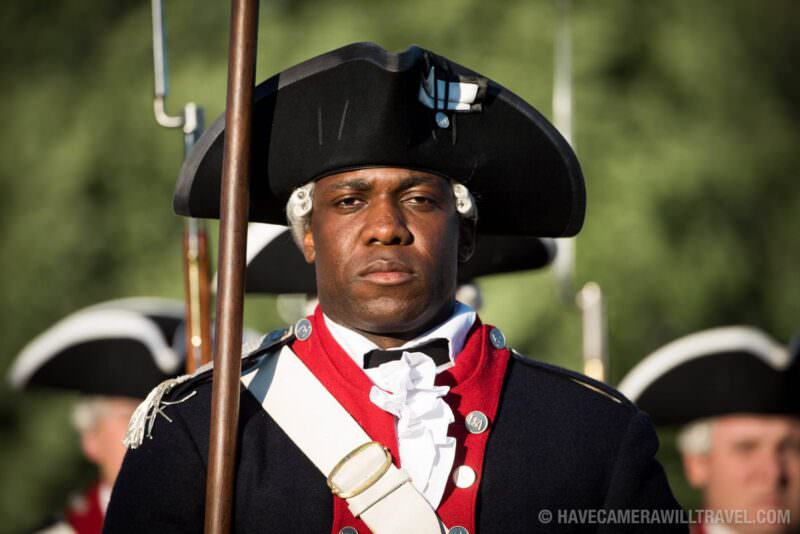 By David Coleman
Last Updated: April 2, 2021
Filed Under: Events & Happenings
Topics: Arlington VA, Military, Parades
Due to COVID-19 mitigation efforts, the 2021 season has been cancelled. If conditions permit, the U.S. Army Military District of Washington plans to return with the traditional program in May and June 2022.

The Army Twilight Tattoo just might be the most exuberant. It runs on Wednesday and (some) Thursday evenings in the summer on a military base near Arlington Cemetery and the Iwo Jima Memorial in Arlington, Virginia.

The Army bills it as a “live-action military pageant,” which is as good a description of it as any. It is part history lesson, part recruiting pitch, and part broadway musical. Throw in firing cannons and other pyrotechnics, galloping horses, singing, historical military uniforms, and the US Army Blues band rocking out live, and you have quite a show. Overall, it’s far more theatrical than the Marine Corps Sunset Parade, which is held nearby on Tuesday evenings.

And in a nice touch, the soldiers stay on the field after the show to pose for photos and answer questions.

The grand finale features a battery of live-firing cannons. So if you’re taking kids or others who don’t like loud noises, you might want to prepare them for that.

Due to COVID-19 mitigation efforts, the 2021 season has been cancelled. If conditions permit, the U.S. Army Military District of Washington plans to return with the traditional program in May and June 2022.

Under normal circumstances, the main show begins at 7pm, with pre-ceremony entertainment starting at 6:30pm. The primary location is a Summerall Field, Joint Base Myer-Henderson Hall. In the event of inclement weather, it moves indoors to Conmy Hall.

Photos of the Army Twilight Tattoo

To give a sense of what to expect, here are some photos of the Army Twilight Tattoo at Joint Base Myer-Henderson Hall.

The Twilight Tattoo is on the grounds of Joint Base Myer-Henderson Hall (it used to be known as Fort Myer), an active military base. Pedestrians will need photo ID to get onto the base, and there are bag searches and a security checkpoint to get to the event. There’s no on-site parking, but you can usually find street parking in the nearby Arlington neighborhood with a short walk. Alternatively, there are several public transportation options–you can find more details here.

The event is free, and there are no tickets. There’s some stadium seating that’s first-come-first-served. There’s also plenty of grass to sit on. But it can still fill up.

In general, no reservations are required for individuals and small groups. And while the area can handle quite a large crowd, there are occasions when large groups can fill the place to capacity, so it’s worth confirming specific performances here for any “at capacity” notes.

Large groups hoping to attend should contact the organizers directly in advance.

In the event of inclement weather, the event moves indoors to Conmy Hall.

The Army Twilight Tattoo is unusually photographer-friendly. As the event’s official information puts it:

Twilight Tattoo offers ample opportunities for still photographers and videographers. Patrons are welcome to photograph our Soldiers before, during and after performances.

Be aware that your bags will be searched, so allow time for that.