Arlington Memorial Bridge runs across the Potomac from the Lincoln Memorial to Arlington National Cemetery, one of six bridges connecting Virginia with the District of Columbia. 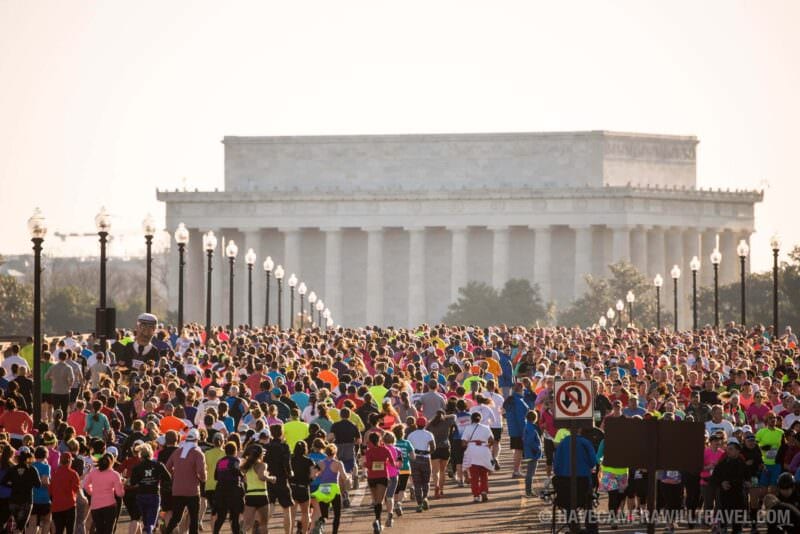 Arlington Memorial Bridge runs across the Potomac from the Lincoln Memorial to Arlington National Cemetery, one of six bridges connecting Virginia with the District of Columbia.1 It was opened in 1931 by President Herbert Hoover.

On the northeastern end of the Bridge, closest to Lincoln Memorial, are two large gilded bronze statues by Leo Friedlander named The Arts of War; the individual statues are Sacrifice and Valor and match two other statues at the entrance of Rock Creek Parkway known as the Arts of Peace. The statues were donated by the Government of Italy and dedicated on 26 September 1951, but the story of how they got there is interesting.

The original plans for these statues date back to 1928. They were originally designed to be carved from granite, but that became too expensive, so in 1931 plan was changed to a cheaper alternative: bronze. The plaster models were completed by 1938, but with war breaking out in Europe bronze became one of the many things rationed for the war effort. By the time the plaster models were brought out of storage at the end of the war, escalating prices had outpaced the project budget. So the Italians came to the rescue, proposing that the casting be done in Florence and Milan. The government of Italy would then donate the statues to the United States in appreciation for U.S. aid provided through the Marshall Plan. And having the Italians construct them solved another problem. The guilding process, dating back to Roman times, used a mix of gold and mercury; the mercury evaporates and leaves a fine layer of gold. But in the United States, working with mercury in that way was illegal due to health regulations. In Italy, however, it was still legal.2

The bridge is actually a drawbridge, designed to be raised to allow ships to pass through. But the drawbridge hasn’t been opened since 1961.3

In the waters to the south of Memorial Bridge towards the 14th Street Bridge is where, in January 1982, an Air Florida flight crashed into the icy waters of the Potomac after taking off from nearby Reagan National Airport in bad, wintry weather, killing 78 people (74 on board and 4 motorists crossing the 14th Street Bridge).

At the moment, Memorial Bridge is badly in need of repairs. There are structural issues that have already resulted in limits on bus and truck traffic, and if repairs costing hundreds of millions of dollars aren’t implemented soon it might have to stop carrying road traffic completely and be relegated to foot traffic only.

The closest metro stop is Arlington National Cemetery on the Blue Line (0.2 miles). The Washington Metro Trip Planner is very handy for working out how to get from A to B on Washington’s public transport.

There’s plenty of parking (except for major events like Memorial Day or Independence Day, where the lot is likely to fill up early) at Arlington National Cemetery for an hourly rate of $1.75 to $2.50. It’s also a pleasant walk across Memorial Bridge from the Lincoln Memorial.

Memorial Bridge is accessible day and night. From the foot of the bridge on the Virginia side you can get shots of the bridge with the Lincoln Memorial in the frame. At night, the bridge is not brightly lit, but it is lit with lamp posts along both sides.

Commercial photo shoots and film may require a permit.