Japanese Lantern at the Tidal Basin

Sitting on the banks of the Tidal Basin amongst the famous Japanese cherry blossoms, the Japanese Lantern dates back to the middle of the 17th century and has been here since 1954. 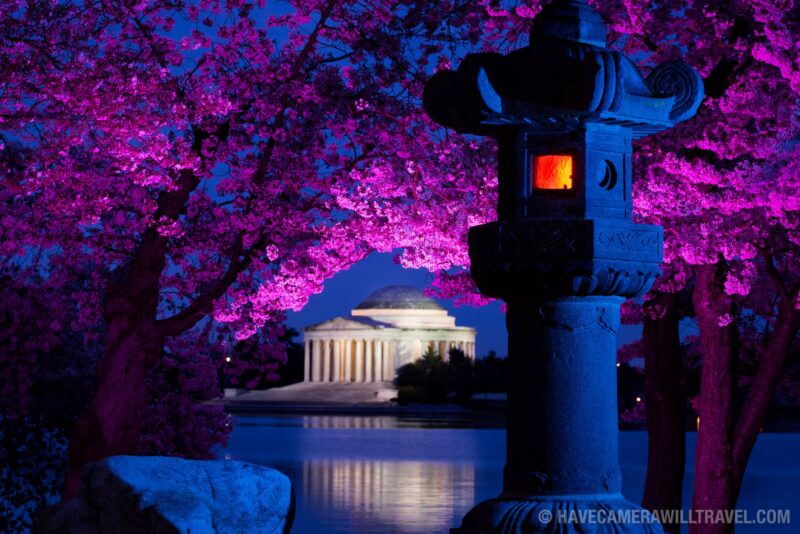 Both are very deliberately placed among the famous cherry blossoms that line the edge of the Tidal Basin. They are, after all, Japanese cherry blossoms, also known as Sakura. And like both monuments, the trees themselves were originally a gift from Japan.

The granite lantern dates back around 1651, making it of a similar age to the Japanese Pagoda.

It was installed here in 1954, but for the first three centuries of its life, it sat in the grounds of a temple in Tokyo. Less than a decade after the end of World War II, it was moved from there and gifted by the governor of Tokyo to the United States on the hundredth anniversary of the peace treaty of Yokohama, which is also known as the Convention of Kanagawa and better known in the United States as the “opening” of Japan to the West by U.S. Commodore Matthew Perry.1

Cherry blossom festivities were already well-established at the Tidal Basin at least a decade for the lantern arrived, but since 1954 the lantern lighting ceremony has become a key ceremonial moment in the festival. The lighting is traditionally done by an “Embassy of Japan Cherry Blossom princesses,” which is usually a daughter of one of the Japanese diplomats based at the embassy.

For many years the lantern looked a bit lonely just stuck on a patch of grass by itself. But within the past few years it has gotten a bit of a makeover with a paved area and boulders around it that help make it stand out more.

There is a similar, but more ornate, stone lantern in the southwest corner of the Enid A. Haupt Garden behind the Smithsonian Castle.

Photos of the Japanese Lantern

How to Get to the Japanese Lantern

The Japanese Lantern is on the northern side of the Tidal Basin, between the MLK Memorial and the large bridge.

Taking Photos at the Japanese Lantern

In general, there’s no problem taking photos here within the bounds of common sense. But please don’t climb any of the nearby trees or put gear on them–most of these are cherry trees, and many of them are old and fragile.

Around the time the cherry blossoms are in bloom there’s usually a small amount of temporary stadium seating around the Japanese Lantern that’s in place for the lighting ceremony. It doesn’t impede access to the lantern itself, but it might not be especially attractive in your photos.

Japanese Lantern at the Tidal Basin