The FDR Memorial, on the western bank of the Tidal Basin, is dedicated to the 32nd president but also features the twin challenges that defined the era: the Great Depression and the Second World War. 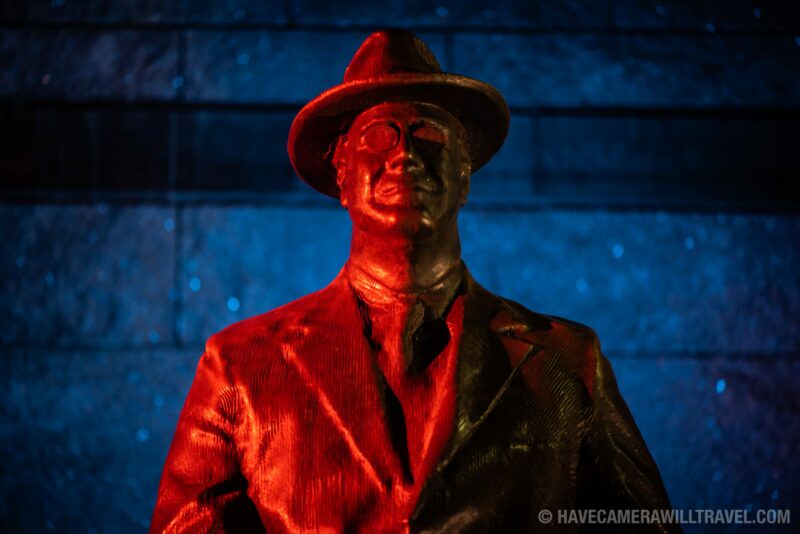 The Franklin Delano Roosevelt Memorial, also known as the FDR Memorial, sits on the banks of the Tidal Basin between the Jefferson Memorial and the MLK Memorial in Washington DC. It’s dedicated to the 32nd president but also prominently features the twin challenges that defined the era: the Great Depression and World War II.

The memorial features dark stone prominently and is shaped by a series of alcoves, water features, statues, and display walls engraved with some FDR’s most famous quotations. There are two bronze statues of FDR, one large one of him sitting with his cape and his beloved dog Fala (a favorite for tourists to pose with). Roosevelt was afflicted with polio at age 39 and spent the rest of his life in a wheelchair. He was rarely photographed in his wheelchair, but one of the statues pointedly depicts him seated in his chair (the other, after much controversy, was redesigned to include it also, but it’s mostly hidden under his cape). There are also statues and sculptures depicting life in the Great Depression and of First Lady Eleanor Roosevelt.

Interestingly, the waterfalls scattered through the memorial are not just there to look pretty–they also serve a practical purpose of providing white noise to help mask the noise from planes taking off and landing across the Potomac at Reagan National Airport.

The FDR Memorial is open year round and, as an outdoor memorial is open day and night. It’s at its scenic best when framed by the blooming of the cherry blossoms ringing the Tidal Basin in early spring.

Photos of the FDR Memorial 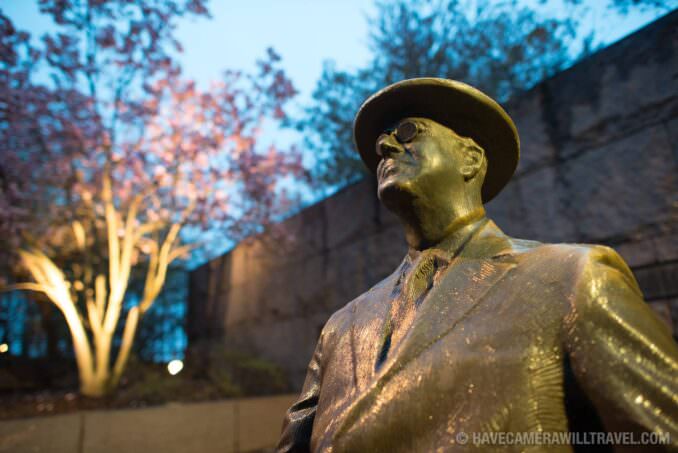 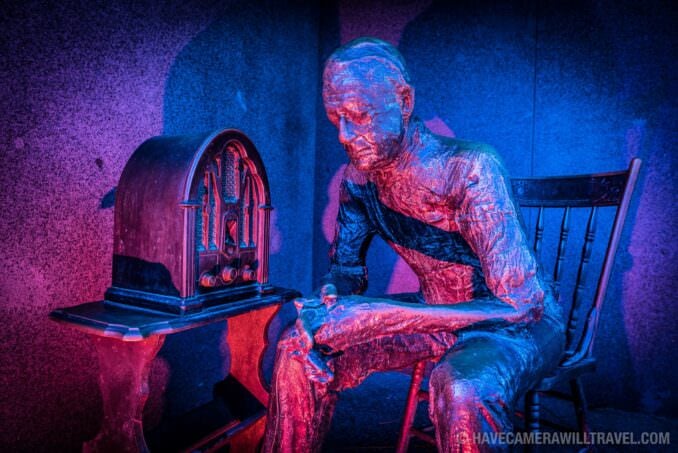 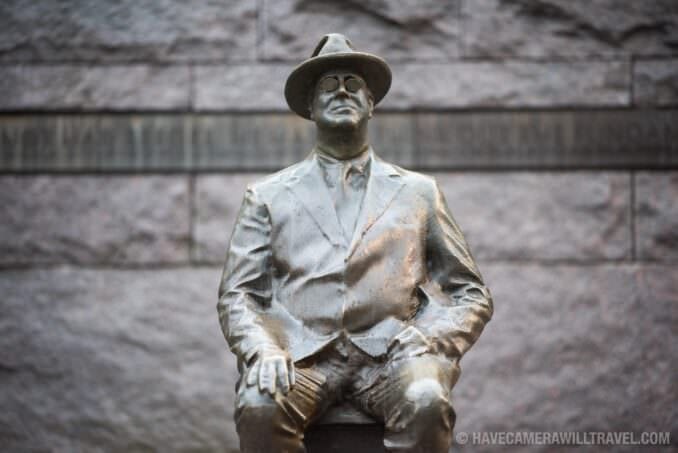 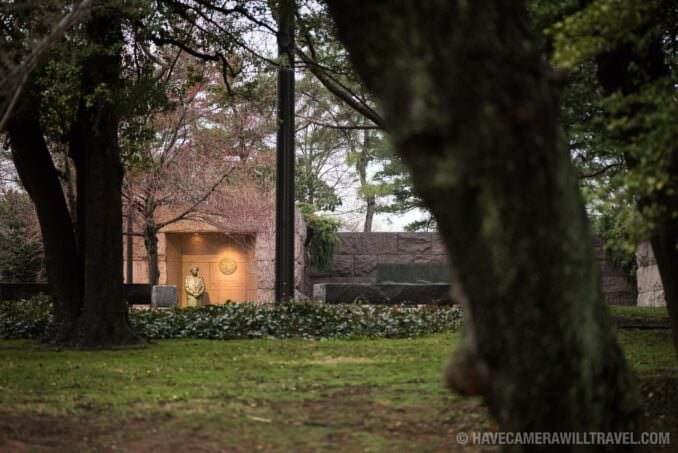 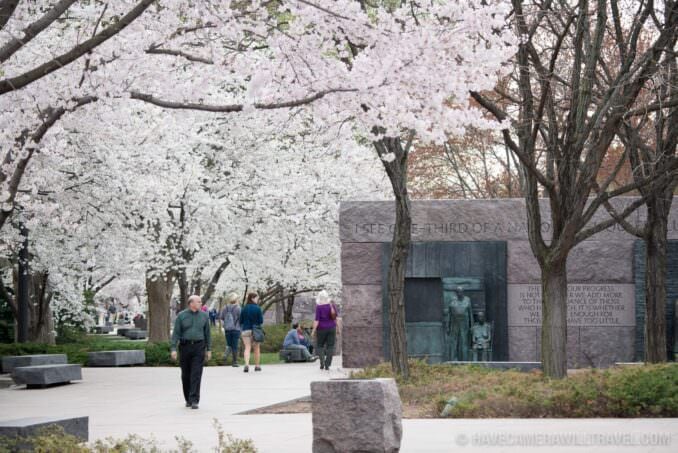 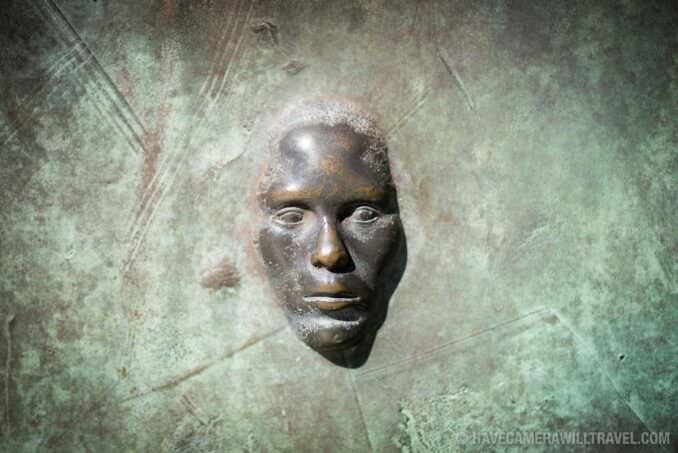 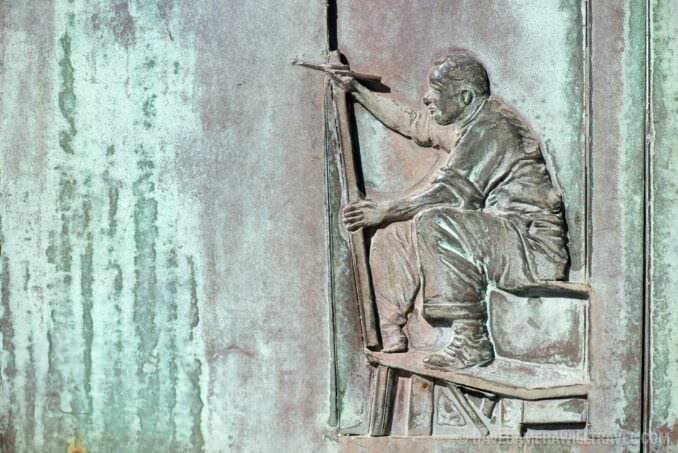 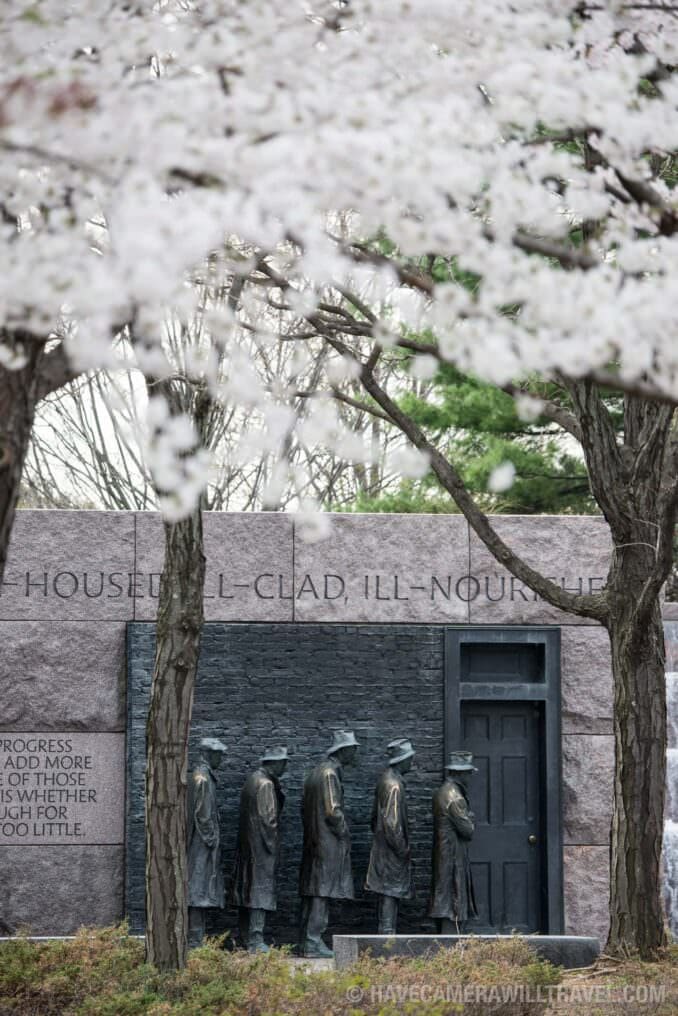 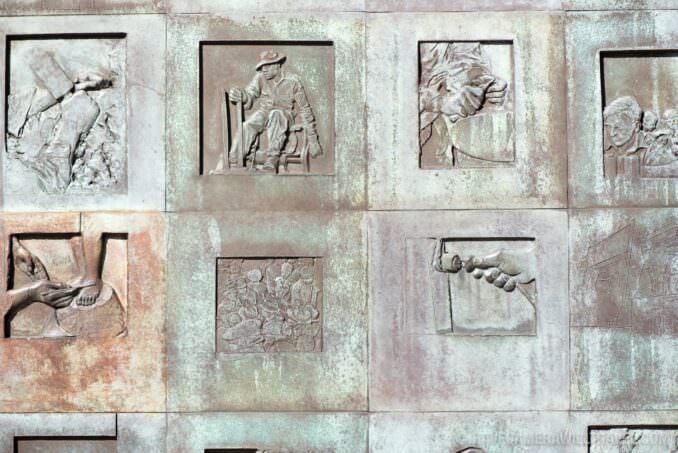 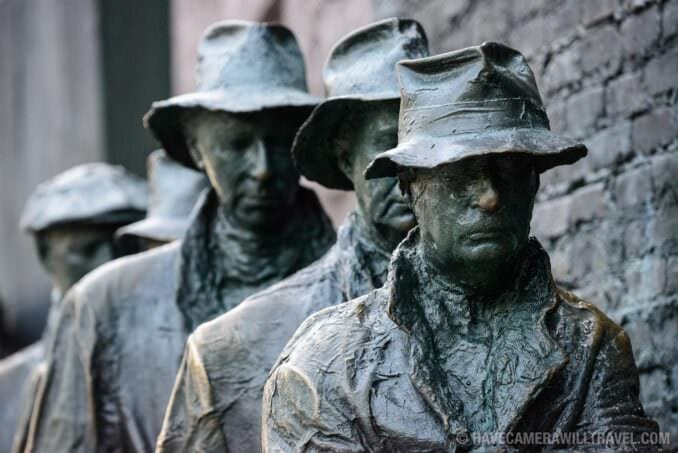 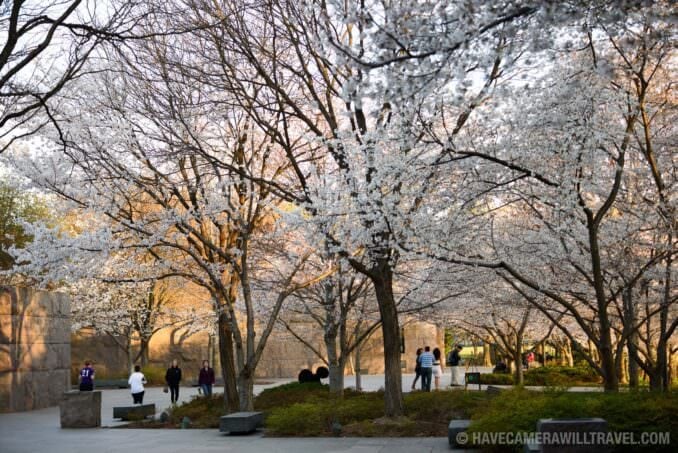 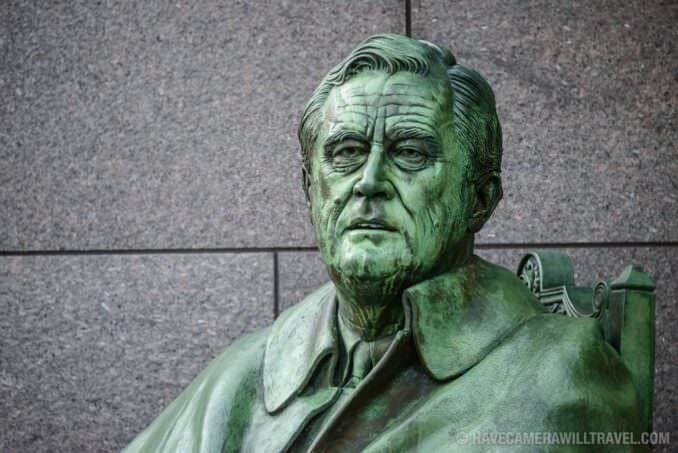 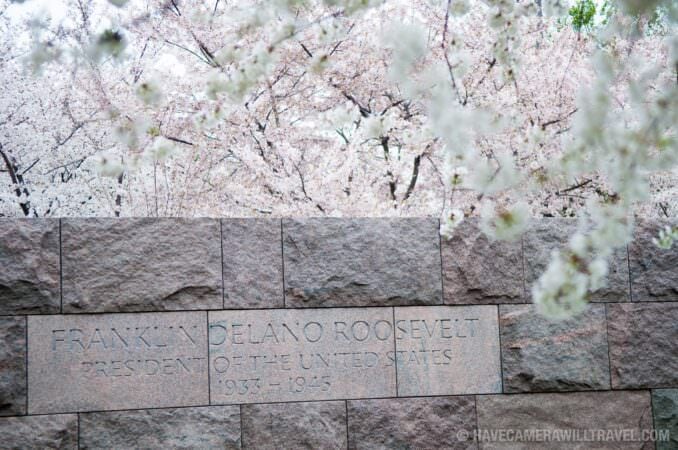 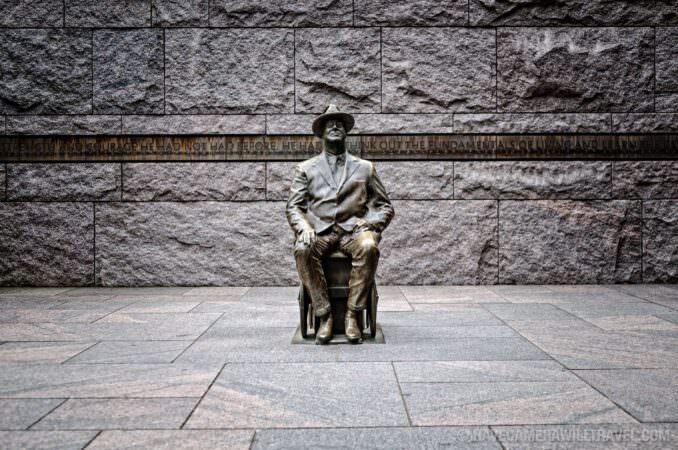 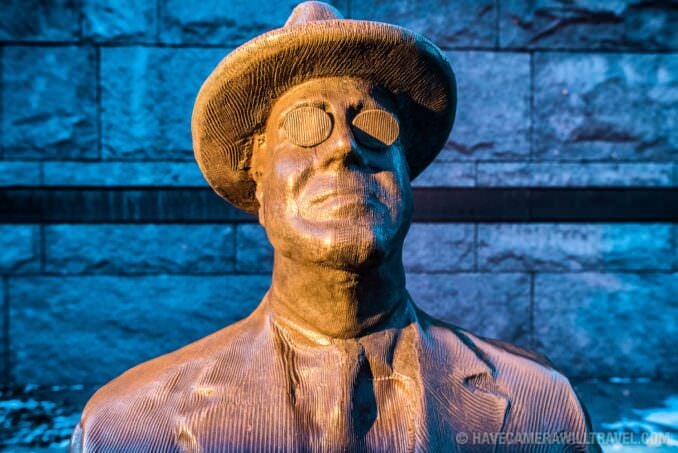 How to Get to the FDR Memorial

The FDR Memorial is open 24 hours a day year round, you can wander around freely, and there are no entrance fees, tickets, or reservations required. Rangers are on hand to answer questions and from 9:30am to 11:30pm and there “interpretive programs” (ie. basically informal tours) on the hour from 10am to 11pm.

As with just about any location near the National Mall, the best way to get to the FDR Memorial is by Metro. The closest stop is Smithsonian (1 mile walk) (Orange line). Metro has a handy Trip Planner and here’s a map of the Metro lines.

Because of construction of the nearby MLK Memorial, West Basin Drive, which runs past the FDR Memorial, is currently closed, so the nearest passenger drop-off point is on Ohio Drive.

There is a small parking lot on the opposite side of the Tidal Basin. (This parking lot is closed off during the National Cherry Blossom Festival.) There’s more parking along Ohio Drive SW, which runs along the Potomac, extending all the way along Hains Point, including some convenient parking lots at the foot of the 14th Street Bridge.

Taking Photos at the FDR Memorial

There’s no problem with handheld photography or using a flash, but tripods are not allowed within the memorial.

Commercial photography and filming is not allowed at all at the FDR Memorial.

What was FDR’s dog’s name?

Fala. There’s a statue of him within the FDR Memorial. He was a Scottish Terrier and was able to perform tricks and frequently got up to mischief, which endeared him to guests and reporters and led to his frequent mention in the press. He often traveled with FDR. Fun fact: Fala was actually his short name. His full name was Murray the Outlaw of Falahill, named after one of Roosevelt’s famous Scottish ancestors.