Tucked away between the Jefferson Memorial and the 14th Street Bridge, the George Mason Memorial commemorates one of the lesser known founding fathers and Virginia plantation owner, George Mason.

A Virginia plantation owner, reluctant public servant, and author of the Virginia Declaration of Rights, a document that helped inspire the American Declaration of Independence, and attendee at the 1787 Constitutional Convention, Mason was called by Thomas Jefferson “the wisest man of his generation” and regarded by George Washington as a mentor. He is widely hailed as an early champion of human rights and his writings helped inspire the 1948 United Nations Declaration of Human Rights.

The Mason Memorial was dedicated in April 2002, although the garden and fountain date back to 1905; the memorial was designed to incorporate those existing elements. Its centerpiece is a slightly larger-than-life bronze statue by Wendy M. Ross of Mason seated on a stone bench under a pergola. Ross depicted Mason in a very relaxed pose looking out over a garden and fountain. In his hand is a copy of Cicero’s De Officiis and on the bench next to him is his hat, staff, and books by Locke and Rousseau.1

The George Mason Memorial is one of only three locations in the National Mall and Memorial Parks system where wedding ceremonies are permitted (with a permit). The others are the West Lawn of the Jefferson Memorial and the DC War Memorial/World War I Memorial.

Photos of the George Mason Memorial 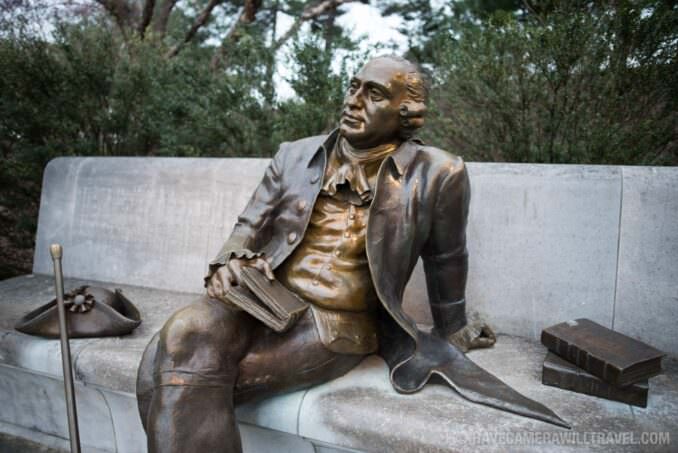 Getting to the George Mason Memorial

The George Mason Memorial is next to the southern shore of the Tidal Basin, right by the Jefferson Memorial.

The closest metro stop is Smithsonian (0.9 miles) (Orange line). Metro has a handy Trip Planner and here’s a map of the Metro lines.

All of the parking nearby is now metered with Parkmobile spots. There are three small parking lots nearby, behind the Memorial and just past the bridges. It’s a short walk from those to the Memorial. There is also usually parking along the side of West Potomac Park across the other side of the small stone bridge. There’s also a parking lot on the opposite side of the Tidal Basin, although that’s a significantly longer walk to the George Mason Memorial from there.

The Mason Memorial is accessible all day and night. There’s some lighting at night (but not a lot). There’s no problem using a tripod or flash.

In the early spring, there are several tulip magnolia trees that are especially striking when they’re in bloom (usually a week or two ahead of the cherry blossoms nearby. With low-hanging branches and appearing before the cherry blossoms, they’re a very good option if you’re looking for a colorful background to take family or portrait photos but are too early for the cherry blossoms.

Commercial photo shoots and filming may require a permit.