The LBJ Memorial is on the Virginia bank of the Potomac with views of Washington DC’s monuments across the river. It’s dedicated to the 36th president who occupied the White House during the tumultuous 1960s. 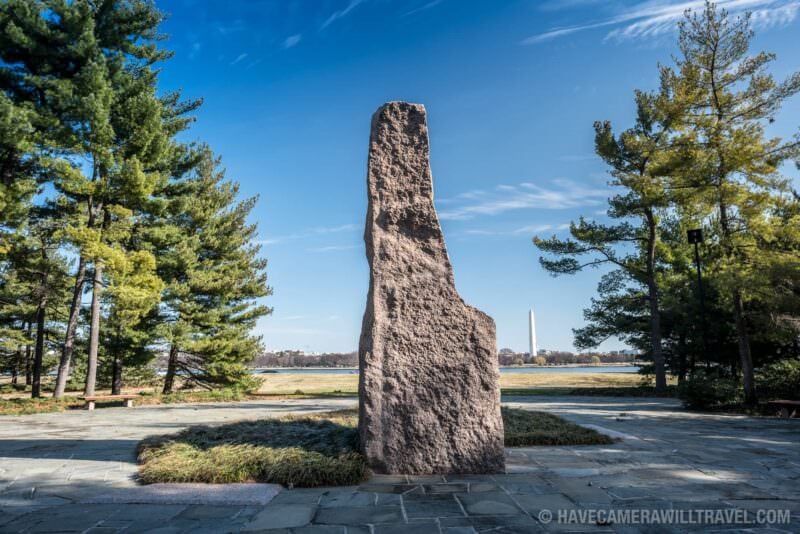 The LBJ Memorial doesn’t offer many visual clues that it’s dedicated to the 36th American president. There are no statues–at least, not in the conventional sense, like at the FDR, Lincoln, Teddy Roosevelt, or MLK Memorials–and not even any photographs. Instead, there’s a large rock.

But it’s not just any rock. It’s a large chunk of granite from the Texas hill country near Austin where LBJ grew up. Arounds its base are stones with some quotes from LBJ inscribed. They read:

The promise of America is a simple promise: Every man shall share in the blessings of this land.

I believe that every boy and girl in this great land has a right to all the education he or she can use. . . . I intend to work to make this right a reality.

All my life I have drawn sustenance from the rivers and from the hills of my native state. . . . I want no less for all the children of America than what I was privileged to have as a boy.

I hope it may be said, a hundred years from now, that by working together we helped to make our country more just for all its people. . . . I believe at least it will be said that we tried.

The granite monolith sits amidst a grove of trees with some walking paths spiraling through the trees. The grove sits adjacent to a grassy meadow. The layout was designed by landscape architect Meade Palmer. From much of the area there are views across the Potomac of some of the monuments such as the Jefferson Memorial and Washington Monument.

According to his wife, Lady Bird, Lyndon Johnson used to like this spot on the Potomac, with its views of Washington DC’s monuments across the river. Apparently it reminded him of a river near his childhood home. And every president could be excused to want to escape the pressure-cooker of the White House for a while–LBJ doubly so with the Vietnam War dragging the country, and his presidency, down.

This isn’t to be confused with the LBJ Library and Museum, which is in Austin, Texas.

Photos of the LBJ Memorial 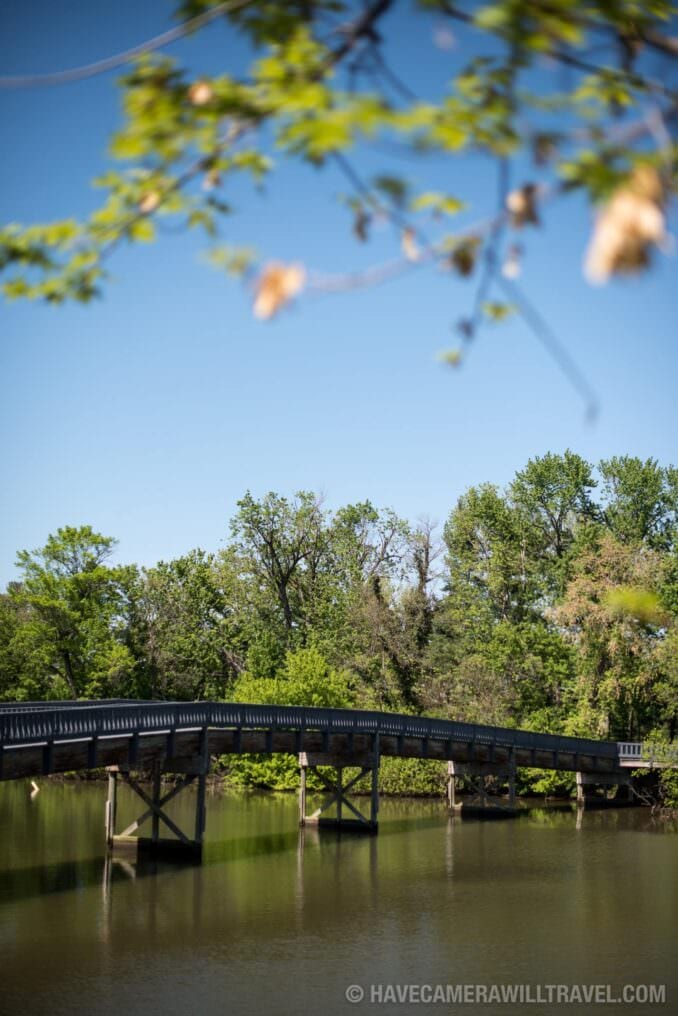 Taking Photos at the LBJ Memorial

There’s no problem taking photos, using a tripod, or using a flash.

In the early spring, the meadow next to the memorial is filled with daffodils. And in the fall, there are some large trees that with colorful leaves that can provide a pretty backdrop for fall family photos.

Getting to the LBJ Memorial

Cartographers will point out that Lady Bird Johnson Island is technically within the DC boundary. The border between Virginia and the District of Columbia runs down the middle of the small waterway known as Boundary Channel. But unless you’re coming by boat, the only way to access it is from Arlington. So for all practical purposes, it’s in Arlington, VA.

It’s a quiet and low-traffic area that’s accessible 24 hours. It can be secluded and deserted after hours, so use common sense to maintain personal safety. There are no NPS staff stationed here.

There are two parking lots next to the memorial. One is next to the Columbia Island Marina, with the entrance from the GW Parkway heading south (there’s no way to get in from the lanes heading north, so go up to the roundabout at Memorial Bridge to come back around).

The other parking lot is the other side of the channel next to the Pentagon’s north parking lot. It’s then a short walk across a small wooden footbridge to the memorial.

The nearest Metro station is Pentagon. The station is on the other side of the Pentagon and across the expansive parking lots, so it’s a bit of a walk from there across to the memorial and not well signed.

A more scenic option is to walk along the river, either from Memorial Bridge or Arlington Cemetery or coming from the other direction from the Jefferson Memorial, across the 14th Street Bridge (there’s a walkway on one side of it), and past the Navy-Merchant Marine Memorial.