It’s entirely appropriate that the memorial dedicated to Teddy Roosevelt is a little unkempt. America’s 26th president was famously a champion of the environment and an avid hunter and outdoorsman. But his memorial isn’t well known. 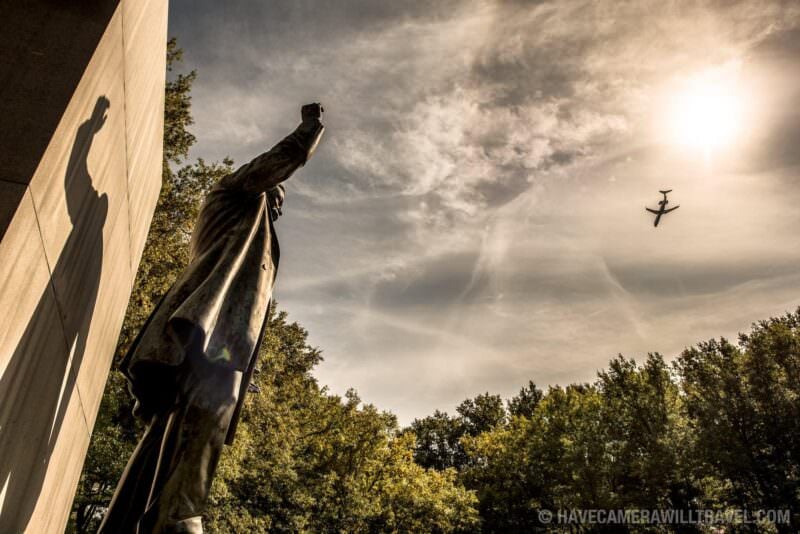 It’s entirely appropriate that the memorial dedicated to Teddy Roosevelt is a little unkempt. America’s 26th president was famously a champion of the environment and an avid hunter and outdoorsman.

His memorial isn’t with the others on the National Mall, although it’s not far away. But you’d have to really be looking for it to find it. It’s on a small, overgrown island on the Potomac River just off the George Washington Parkway, across the river from the Kennedy Center and Georgetown.

At the memorial’s heart is a 17-foot-high bronze statue of Roosevelt posed as if speaking. The statue sits in a large paved plaza. Around the ends are four stone monoliths with key Roosevelt quotes. And there’s a large water ring around the plaza, although that’s not always in operation.

Interestingly, the island was not always as overgrown and unruly as it now appears. At the turn of the 19th century, the island, then called Analostan Island, was the property of General John Mason (son of George Mason). He built a neoclassical home surrounded by formal gardens, orchards, and sheep pastures. George Washington, Thomas Jefferson, and Louis Philippe of France were all guests there. None of that original development remains. When the island become government property in the 1930s, the overgrown and run down remains were removed.1

Photos of the Theodore Roosevelt Memorial

How to Get to the Theodore Roosevelt Memorial

You can walk there from the Lincoln Memorial. Cross Memorial Bridge and take a right along the parkway path towards Georgetown. You’ll come across a parking lot and bridge across to the island.

You can also walk there from Georgetown. Cross Key Bridge into Arlington/Rosslyn and then take a left. The path will lead you to the Roosevelt Island parking lot.

For metro, Rosslyn station on the blue/orange line is closest.

There’s no problem using a tripod or flash, but Roosevelt Island is closed at night.

You can find more of my photos of the Teddy Roosevelt Memorial here.