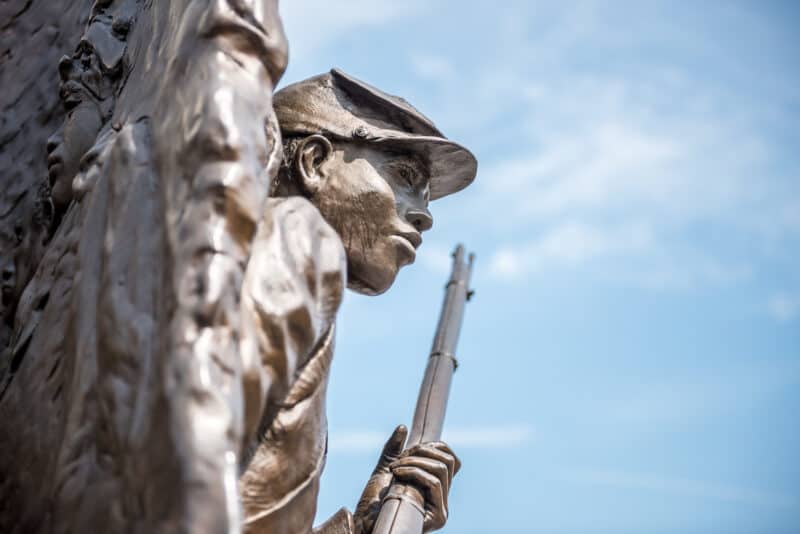 It commemorates the service of 209,145 African-American soldiers, about 7,000 white and 2,145 Hispanic soldiers, and their officers, amounting to nearly 220,000, plus the approximate 20,000 unsegregated Navy sailors, who fought for the Union in the American Civil War, mostly among the 175 regiments of United States Colored Troops.

The Spirit of Freedom, by Ed Hamilton

At the heart of the memorial is a bronze sculpture by Kentucky-based sculptor Ed Hamilton titled The Spirit of Freedom. As you approach, the most striking part of it are the 8-foot tall uniformed figures facing outward in a semi-circle, three solders and a sailor, all members of the United States Colored Troops and all at alert.

They stand on a granite podium with an inscription that reads:

Civil War to Civil Rights and Beyond. This memorial is dedicated to those who served in the African American units of the Union Army in the Civil War. The 209,145 names inscribed on these walls commemorate those fighters of freedom.

Facing outward is a protective semicircle of uniformed soldiers of the Walk around the back, and you’ll see what it is they’re protecting, a depiction of a family with a solider heading off to war.

The sculpture was cast at the New Arts Foundry in Baltimore.1

The Wall of Honor

Radiating out form the southern side of the sculpture are concentric, low semicircles of names etched into metal plaques–209,145 names, members of the United States Colored Troops.

The memorial’s plaza was designed by architects Devrouax and Purnell, and Edward D. Dunson & Associates.1 One thing you might not notice at first is that there are informational panels in the display case windows of the building facing the plaza.

What to Know Before You Go

There is street parking nearby, but availability varies widely depending on time of day and even day of the week. A far more convenient option is to go by metro–an entrance to the U Street station opens right onto the memorial’s plaza.

There are many good restaurants and bars nearby, but if you’re after something distinctly DC, Ben’s Chili Bowl is three blocks away down U Street and is a local institution with its own rich history.