With the notable exception of the Pentagon Memorial on its southwest corner, the entire Pentagon reservation is strictly a no-photography zone. 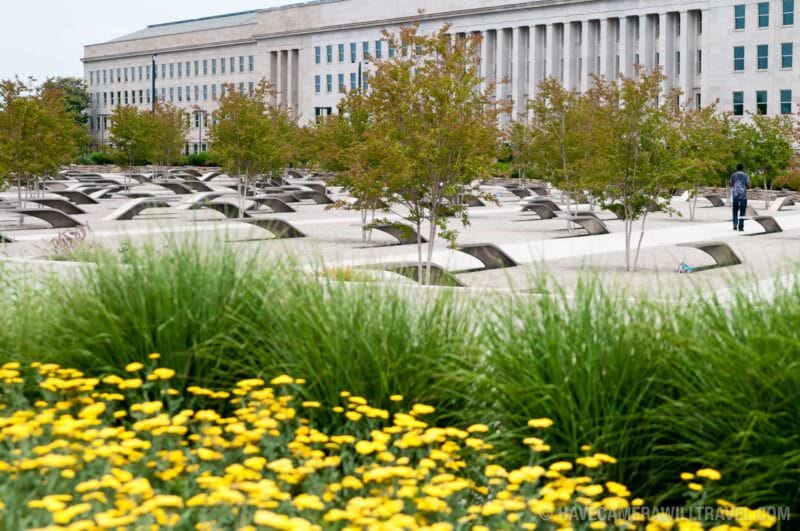 The Pentagon is a vast, impressive, and historic complex, but being the national headquarters of the Department of Defense and given its crucial role in protecting the nation’s security, the entire reservation, with one notable exception, is strictly a no-photography zone. And, for that matter, it’s very much a no-loitering zone as well. And the Pentagon Police don’t mess around.

The exception is the Pentagon Memorial on its southwest corner, which is well worth a visit and where you are allowed to take photos and spend time reflecting.

By far the best way to get to the Pentagon Memorial is by Metro to the Pentagon stop on the Blue and Yellow lines. Metro has a handy Trip Planner and here’s a map of the Metro lines.

It is possible to tour the Pentagon but an advance reservation is required. And be sure to read the security information carefully. This is the part to pertains to cameras:

With the exception of the Pentagon Memorial, and for pretty obvious reasons, the Pentagon is one of the unfriendliest places for photography in the area.

For special events that use the vast Pentagon parking lots as staging areas, like the Rolling Thunder Motorcycle Rally or the U.S. Army Ten Miler, you probably won’t run into trouble so long as you stick to taking photos of the event and don’t try to take photos of the building or its security measures. But, of course, your best bet is to take notice of whatever security personnel tell you.