The Newseum is a celebration of Freedom of the Press, featuring exhibits focusing on print, radio, and television media. It also features exhibits of superb photography, a section of the Berlin Wall, and a large collection of historic newspapers. 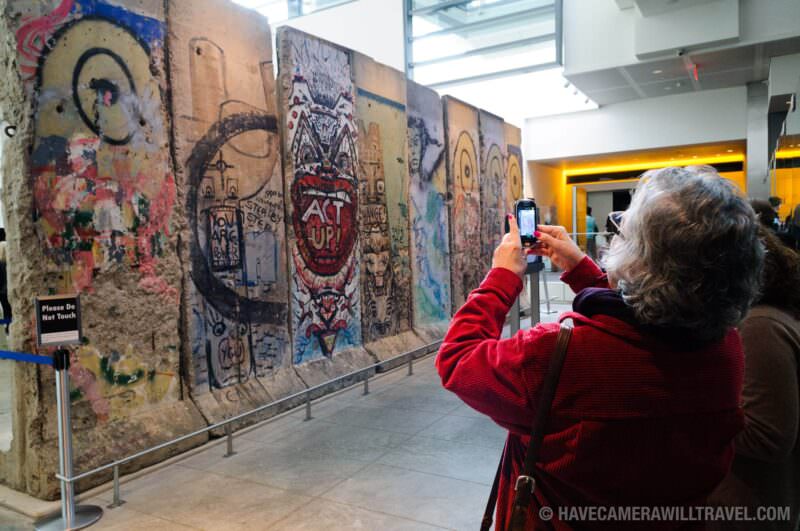 The Newseum wears every dollar of the $450 million it took to create. Opened in its new prime location in downtown DC in April 2008, moved from its former location across the Potomac in Rosslyn, it makes good use of technology and clever exhibit tricks.

And its location certainly wasn’t cheap. It occupies a fantastic spot right on Pennsylvania Avenue, right next to the Canadian Embassy, with unobstructed views of the US Capitol Building. Despite its relatively steep admission price–at least by Washington standards–it has established itself as one of the city’s most popular attractions.

It’s also a functional space. There’s a lot of room that can be repurposed as event space–it’s a favorite venue for the Washington DC fundraising industry–and it includes a fully functional TV studio that is currently used for ABC’s Sunday morning program “This Week.”

The Newseum is a celebration and defense of one of the five fundamental freedoms included in the First Amendment of the American Constitution: the freedom of the press. Run by a non-profit but mostly funded by mainstream media, it puts heavy emphasis on the press’s mandate for talking truth to power.

As you would expect for a museum focusing on information delivered by the written and spoken word, most of the exhibits in the Newseum are wordy. But there are some big artifacts like a news helicopter and communications satellite dangling high above the main entrance hall, a mobile studio truck, microphones used by Edward Murrow and President Roosevelt, OJ Simpson’s suit, and first generation computers and digital cameras used by reporters and photojournalists. And occupying pride of place on the lower level is a large section of the Berlin Wall, replete with one of the Wall’s guard towers. There’s also a twisted section of one of the Twin Towers felled in the 9/11 terrorist attacks.

But it’s not all about words. There’s some great space devoted to photojournalism. A permanent exhibit showcases every photograph awarded the Pulitzer Prize. And there are temporary exhibits on things like sports photography or photographs of the year. So it’s a great place to go to see some superb photography on display.

Photos of the Newseum 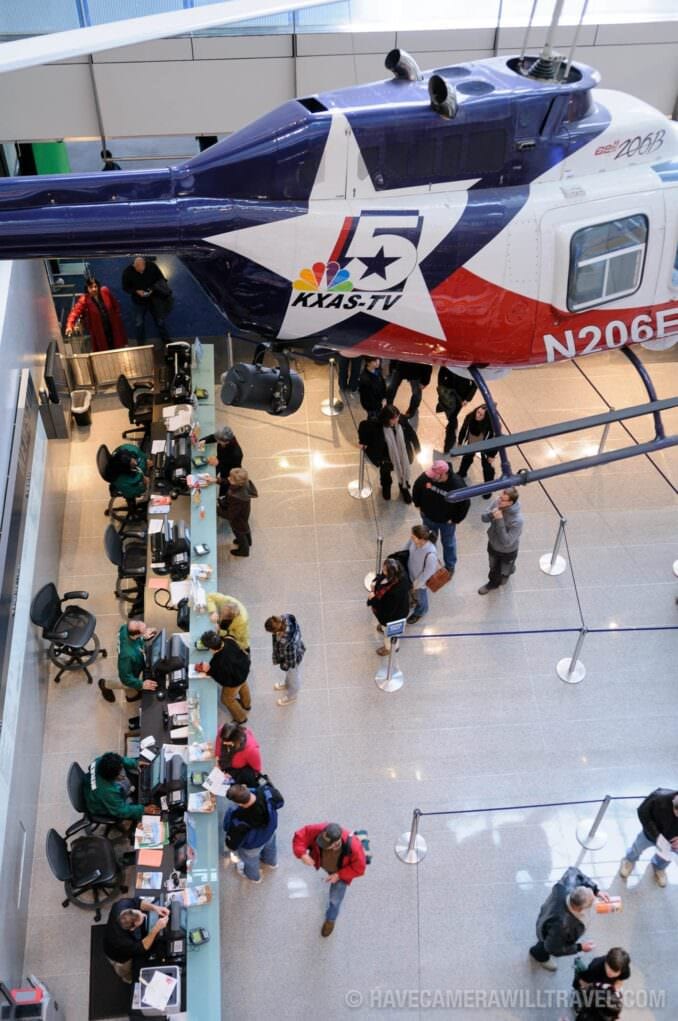 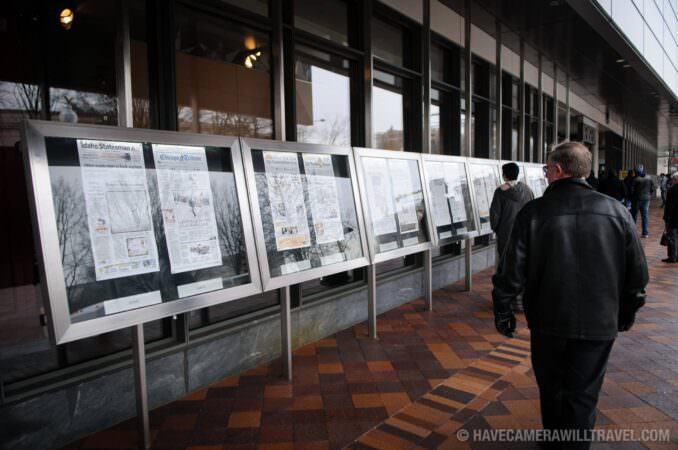 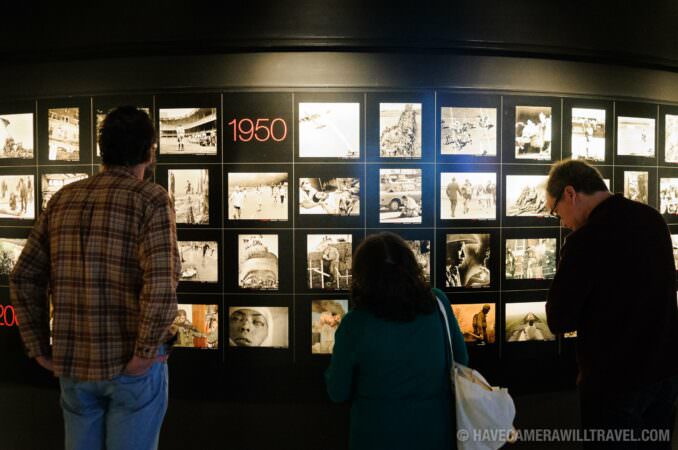 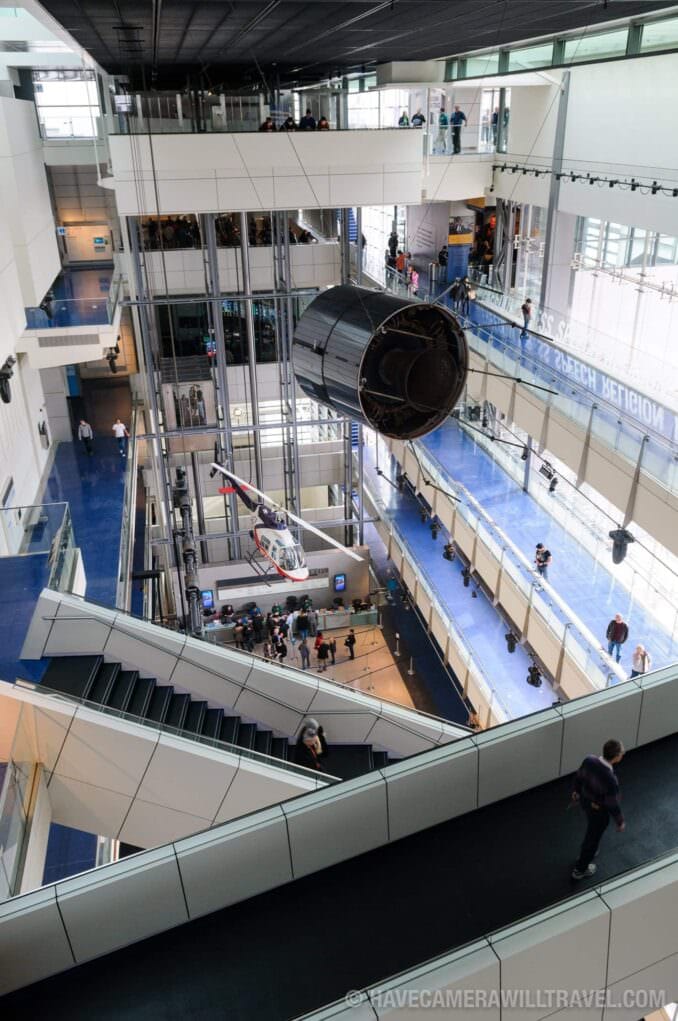 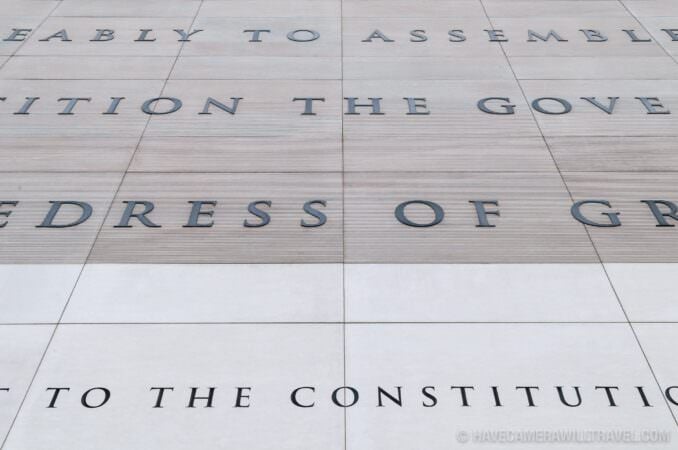 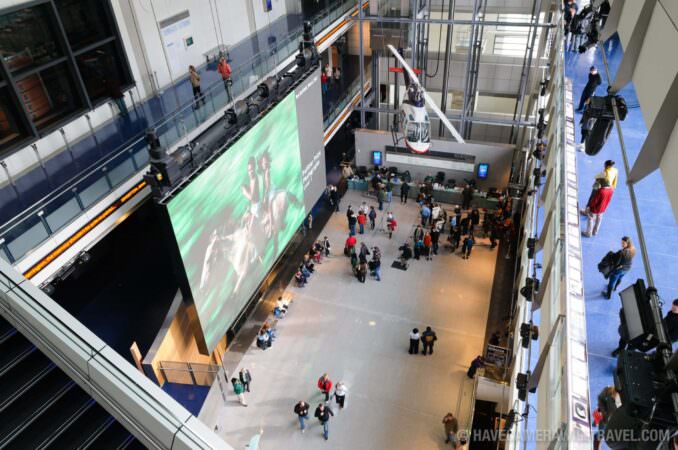 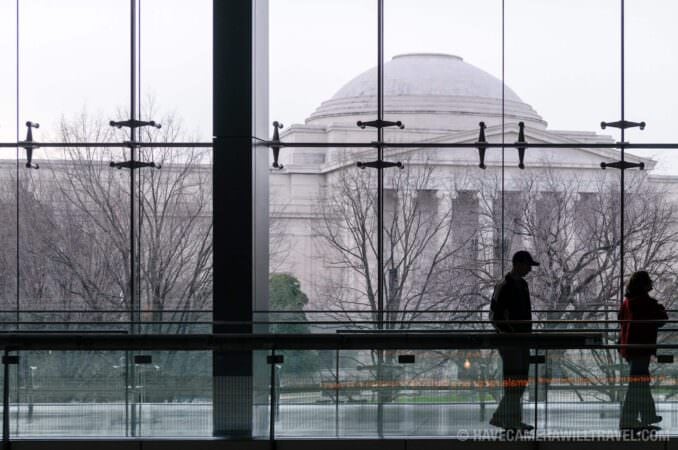 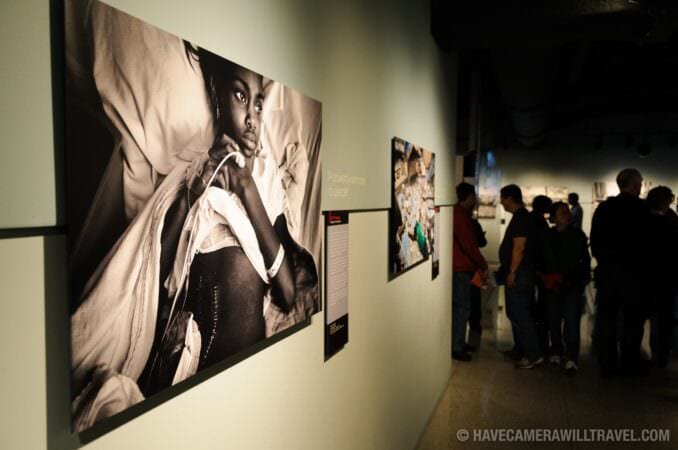 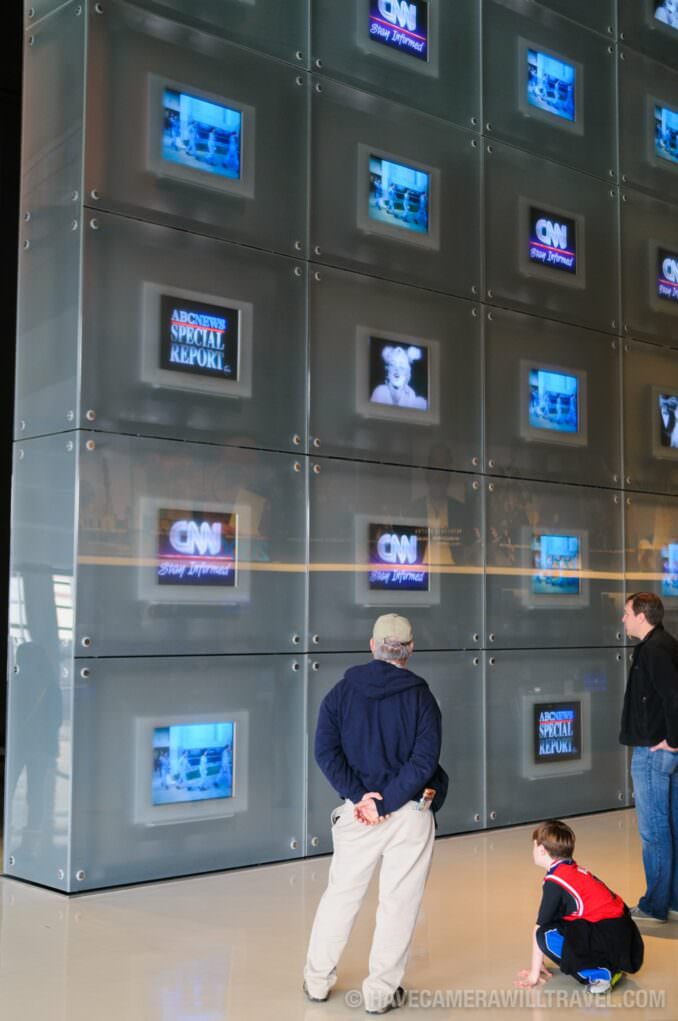 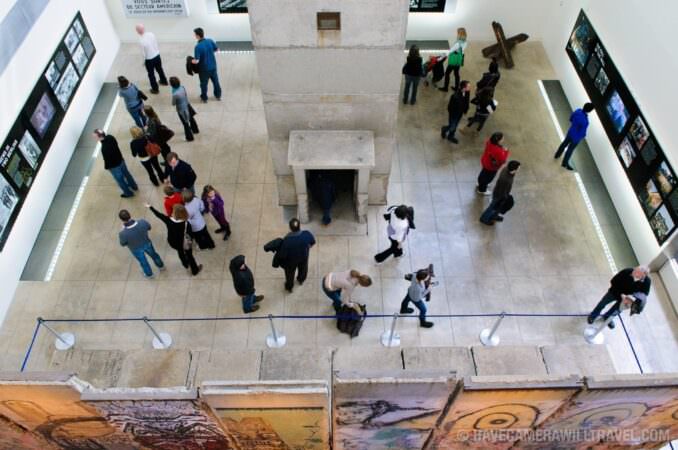 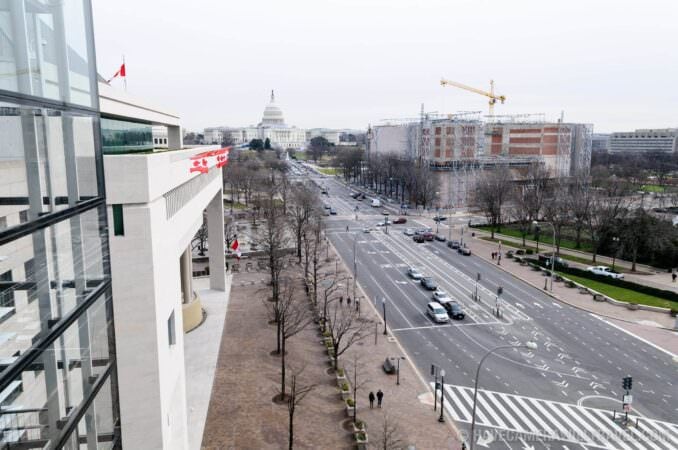 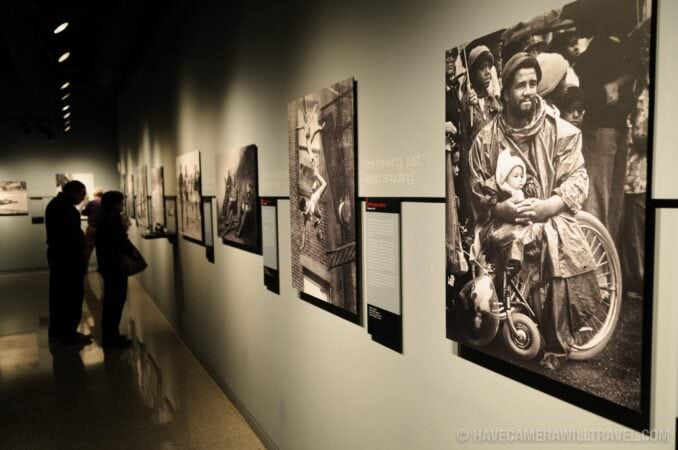 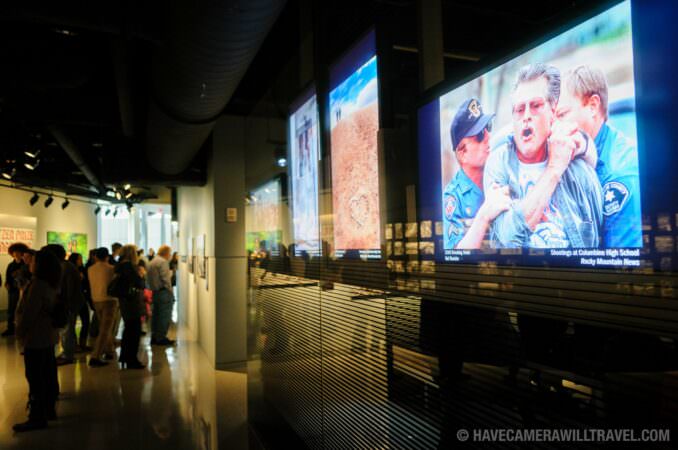 How to Get to the Newseum

Taking Photos at the Newseum

Not surprisingly for a place built as a shrine to the First Amendment, the Newseum’s photography policies are pretty relaxed. Personal photography is allowed in nearly all the museum, although I’ve gotten mixed information from staff on taking photos in the 5th floor exhibit on newspapers. Some say that it’s fine so long as you don’t use flash; others say photography isn’t allowed at all in there. Given how dark that particular exhibit is, it would be a challenge to take photos in there without a flash anyway.

Flash is allowed, with the exception of the 5th floor exhibit. Tripods are not allowed because of the usual tripping hazard issues.

In terms of viewing photos, the photojournalism exhibits are especially rich and will appeal to photographers.

For a great view down Pennsylvania Avenue of the US Capitol Building, head up to the 6th floor outdoor terrace.

How much are Newseum tickets?

If you buy your tickets in advance online you get a 15% discount; here’s the link.

With the standard tickets, you can tour one day and come back the next day for free. Another option if you plan to go regularly (or just want to support their mission) is to join as a member. The membership fee includes unlimited free entry and various other perks.

And they sometimes have promotional rates such a their Summer Fun Deal where anyone 18 or younger is free.

You can find their current ticket prices, links to buy tickets online, and membership rates on the Newseum’s ticket page.

When did the Newseum open in DC?

The Newseum opened at its Pennsylvania Avenue location in April 2008. Before that, it was just across the river in Rosslyn.

Where is the Newseum located?