While it’s not especially well known even to locals, the original National Aquarium is still in the heart of downtown Washington DC. It’s nowhere near the biggest public aquarium in the United States, but it is the oldest. And it’s in a place you would never expect. 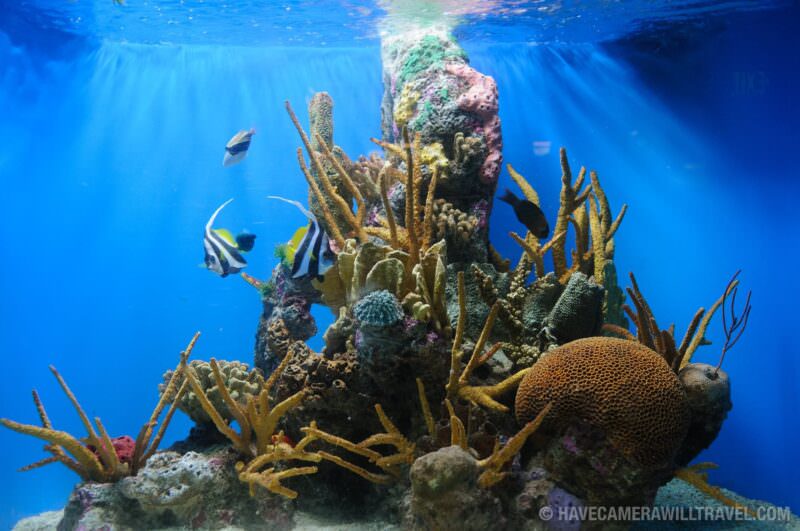 If you Google “national aquarium” from the US, your top hit will be for the Aquarium in Baltimore’s Inner Harbor. If you ask just about anyone in Washington for directions to the National Aquarium, they’ll probably look at you a bit funny and send you north up to Baltimore. But the Washington DC National Aquarium is the original. It’s much, much smaller than its Baltimore sibling. It feels more like a regional field office than an historic national headquarters. And if you want to see dolphins or penguins or performing seals, your best bet is 45 minutes north at Inner Harbor.

But if you have a taste for the quirky, Washington DC’s National Aquarium might appeal. It’s in the basement of the Department of Commerce Building, where it’s been since the height of the Great Depression when the building was completed in 1932; the space was purpose-built at the time. Before that, the National Aquarium was a few hundred yards away and consisted of some ponds at the base of the Washington Monument. Before that, dating all the way back to 1873, it was the nation’s first public aquarium and was actually in Massachusetts.

The National Aquarium is small. It consists of a series of tanks arranged in a looped walkway illustrating different types of marine habitats, with a particular emphasis on examples from the wide variety of national marine sanctuaries that are found within U.S. territorial waters. It’ll take you no more than 30-45 minutes or so to walk around, so it’s perfect for a quick escape from the cold or heat or a fun lunch break. There are a lot of fish (including piranhas, snakehead, lion fish, puffer fish, and angel fish), an octopus or two, turtles, moray and electric eels, crays, stingrays, jellyfish, poisonous frogs, snakes, corals, and even sharks, albeit very small ones. In 2011 through early 2012, there’s even a very rare albino alligator in residence. And there’s not a penguin or seal in sight.

Expansion plans were in the works for 2014, when the National Aquarium was planned to get deep water tanks in what is now one of the Department of Commerce Building’s courtyards, but those plans were evidently abandoned, and the aquarium closed in 2013. 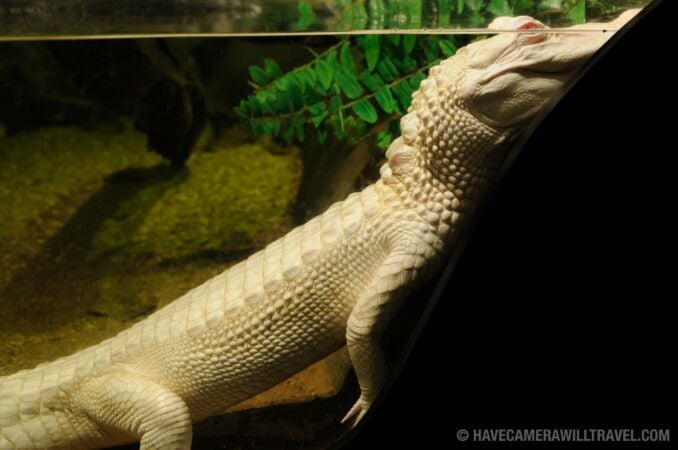 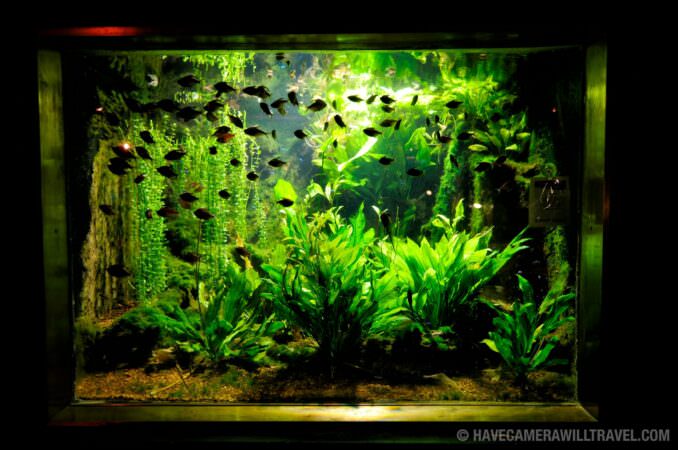 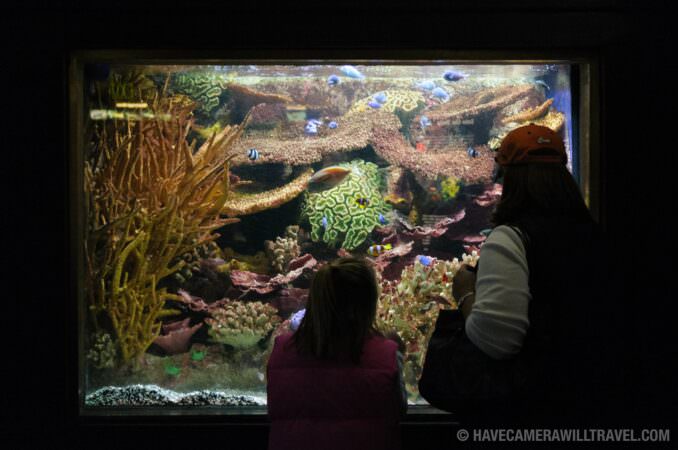 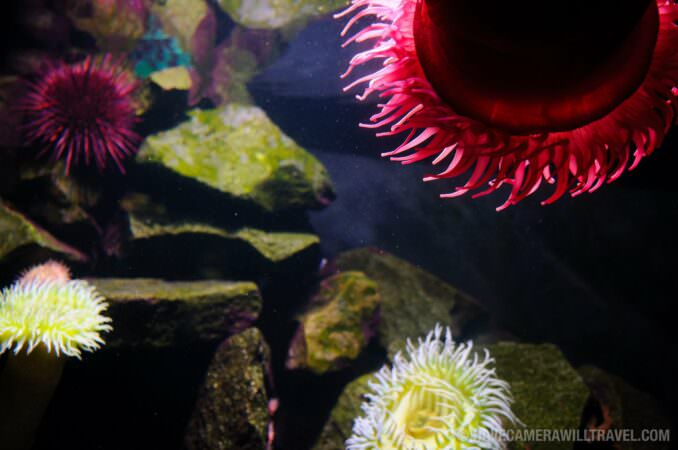 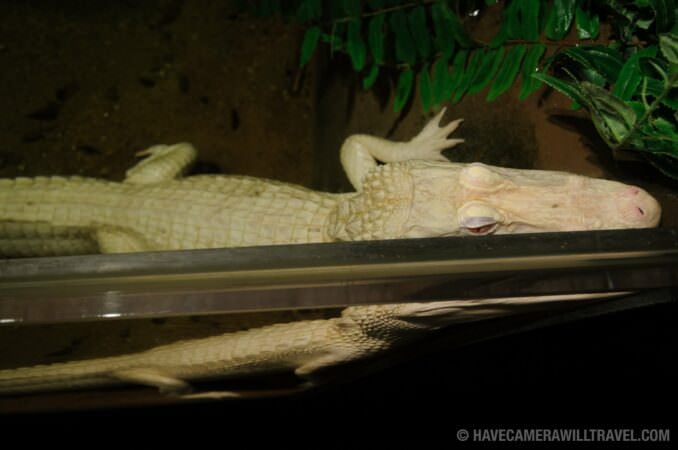 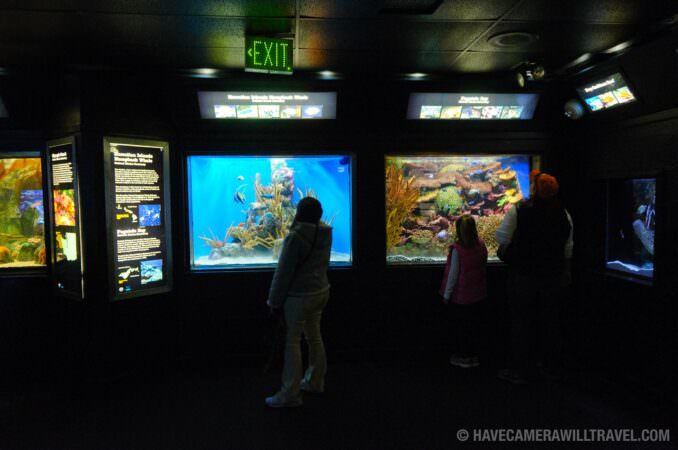 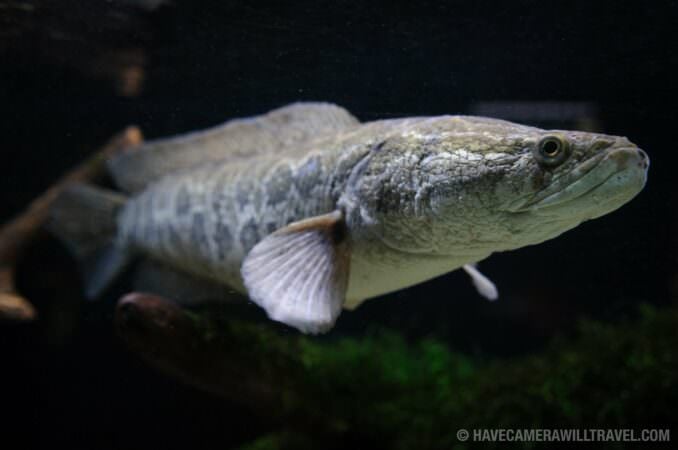 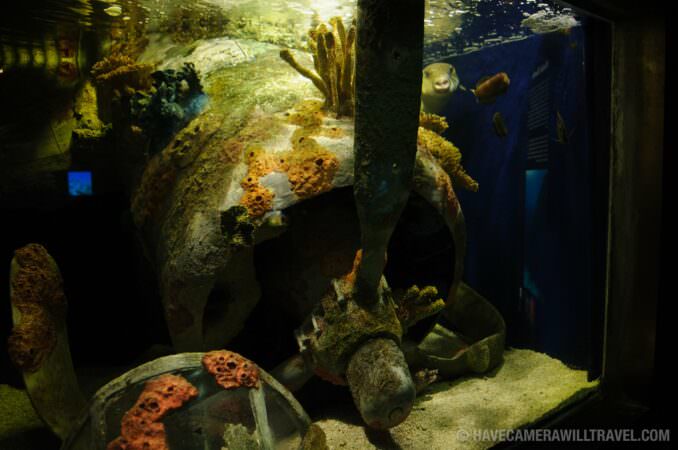 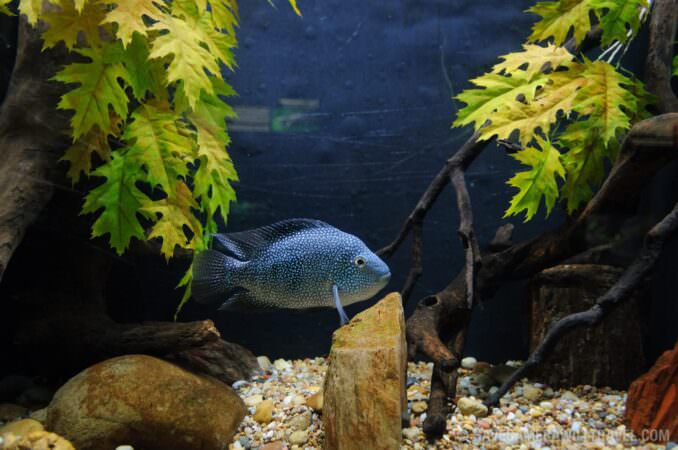 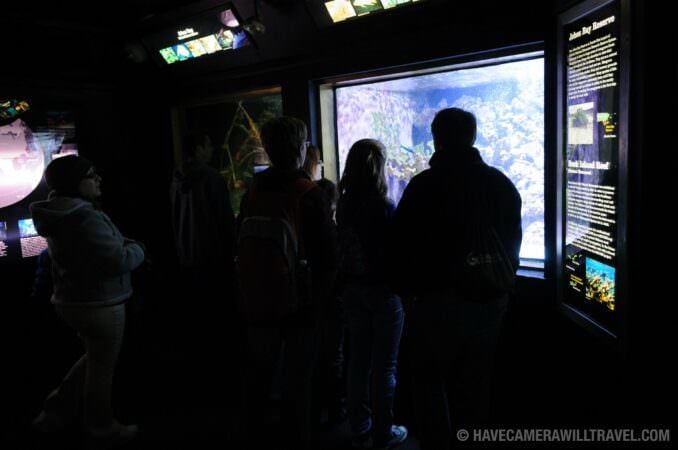 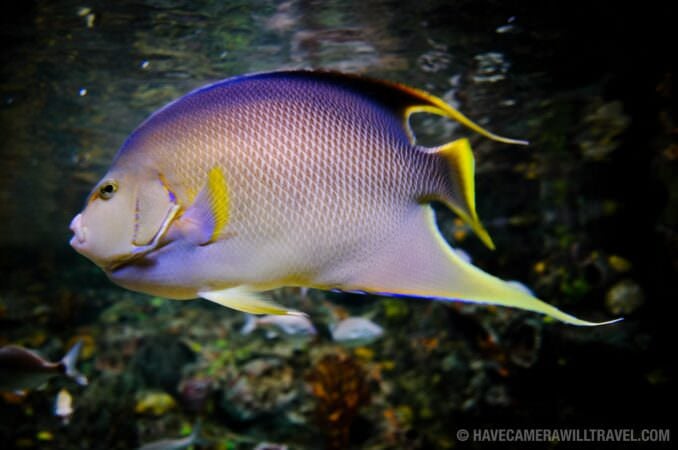 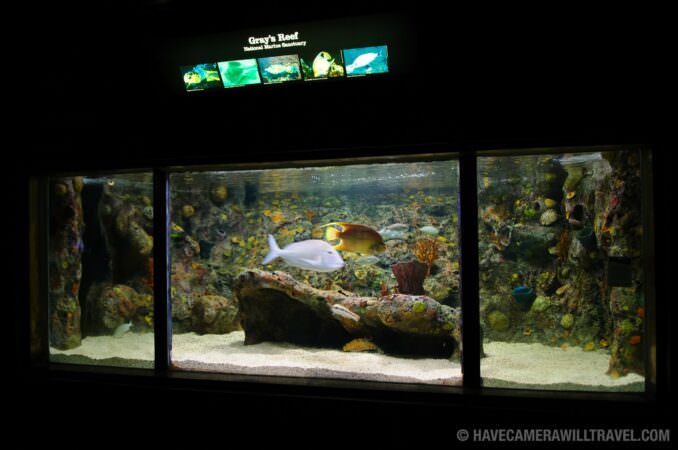 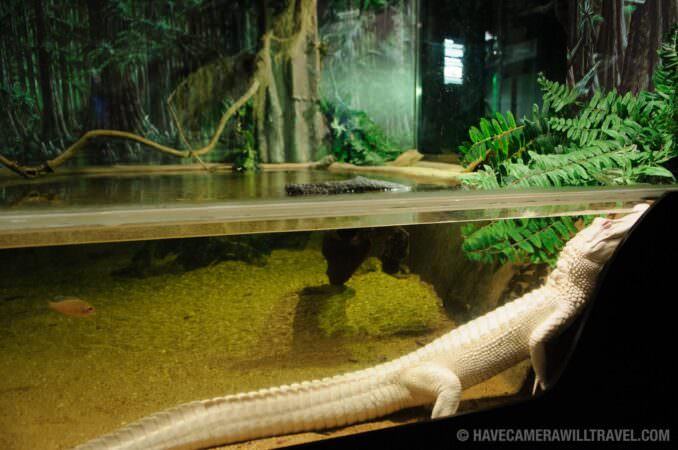 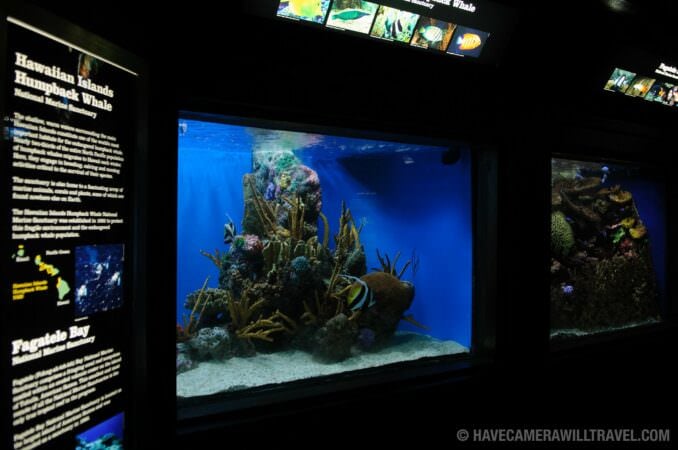 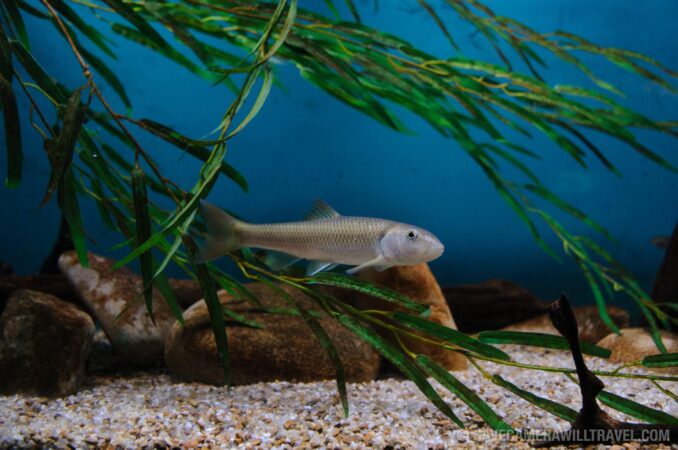 Getting to the National Aquarium

NB: The National Aquarium closed in 2013, so you can no longer visit. An alternative is the much larger aquarium in Baltimore’s National Harbor.

Although the National Aquarium claims a Constitution Avenue address, the main entrance is actually on 14th Street NW between Pennsylvania Avenue and Constitution Avenue, opposite the Ronald Reagan Building, just behind the White House Visitors Center.

The general admission fee is $9.95, less for kids, veterans, and seniors.

There’s a gift shop, but nowhere to buy food or drinks (try the Reagan Building’s food court across the street for that).

Taking Photos at the National Aquarium

NB: The National Aquarium has been closed, making it a bit difficult to take photos there now. So the information below is no longer applicable.

The National Aquarium’s policies are actually very camera-friendly. Cameras are allowed. Flash is allowed in some, but not all, of the areas. There’s only one exhibit–the giant octopus–where you’ll find a “no photos” sign, but that’s because people weren’t turning off their flashes, and the octopus is especially sensitive to light. But even using a flash is a challenge, especially since the attractions are behind glass panels and reflections become a problem.

But there are other challenges to taking photos here. For one thing, it’s dark. The main sources of illumination come from the tanks themselves, which is very effective for showcasing their contents, but makes for a very dark walkway. Some tanks, especially those with deep-sea critters, are deliberately kept dark to mimic the low light of the natural environment that the animals come from. So you’ll find yourself shooting at high ISOs. Good luck taking photos of the giant octopus, which is in an especially dark tank.

For another thing, you’re shooting through glass. That means reflections are an issue. There’s not a lot you can do about that beyond trying to position yourself to minimize reflections. And the glass on many of the tanks is quite scratched, as you can see from some of the shots below. When the subjects are close to the glass–which is where you want them–even using a very small aperture to reduce the depth of field has limited effectiveness in making the scratches less visible.

Tripods will also be of limited use, since the fish don’t tend to sit still long enough to pose for a tack-sharp shot with a slow shutter speed. To mimic the natural environment, many of the tanks have quite a vigorous water current running through them, so pretty much anything that’s not solid and bolted down is constantly in motion. There’s also the safety issue–with such dark walkways, and especially with so many kids around, the risk of someone tripping on a tripod leg is high.