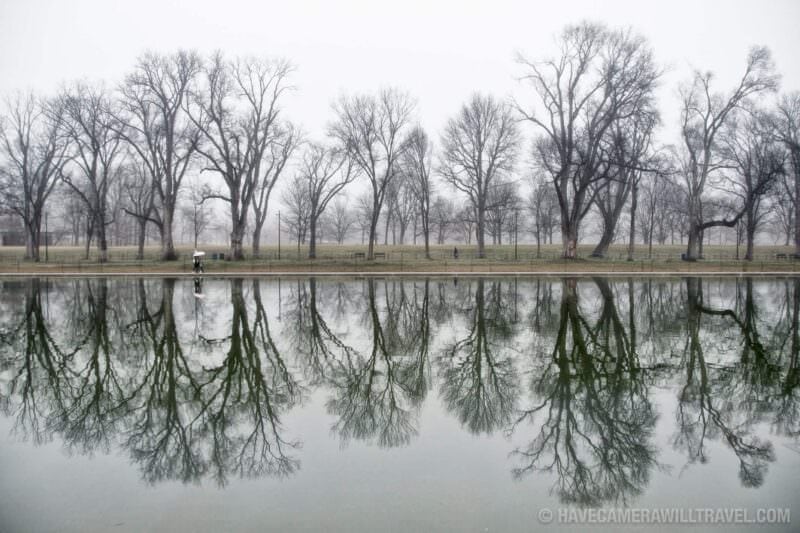 The Lincoln Memorial Reflecting Pool is a long, thin, shallow body of water running from the Lincoln Memorial at one end to the National World War II Memorial at the other. It has been the scene of some of Washington’s most memorable events of the last century or so, perhaps most famously Dr. Martin Luther King‘s “I Have a Dream” speech as part of the 1963 March on Washington, a pivotal moment in the American civil rights movement.

Despite being large and holding around 4 million gallons of water, it’s also shallow, so it gets calm quickly. That provides a smooth, mirror-like surface that offers some stunning reflections. It is particularly effective at night, when the smooth surface of the water provides a sharp reflection for the lights on the monuments at either end.

In recent years, the Reflecting Pool has often been drained in winter into early spring, something to factor in if you’re planning a visit. 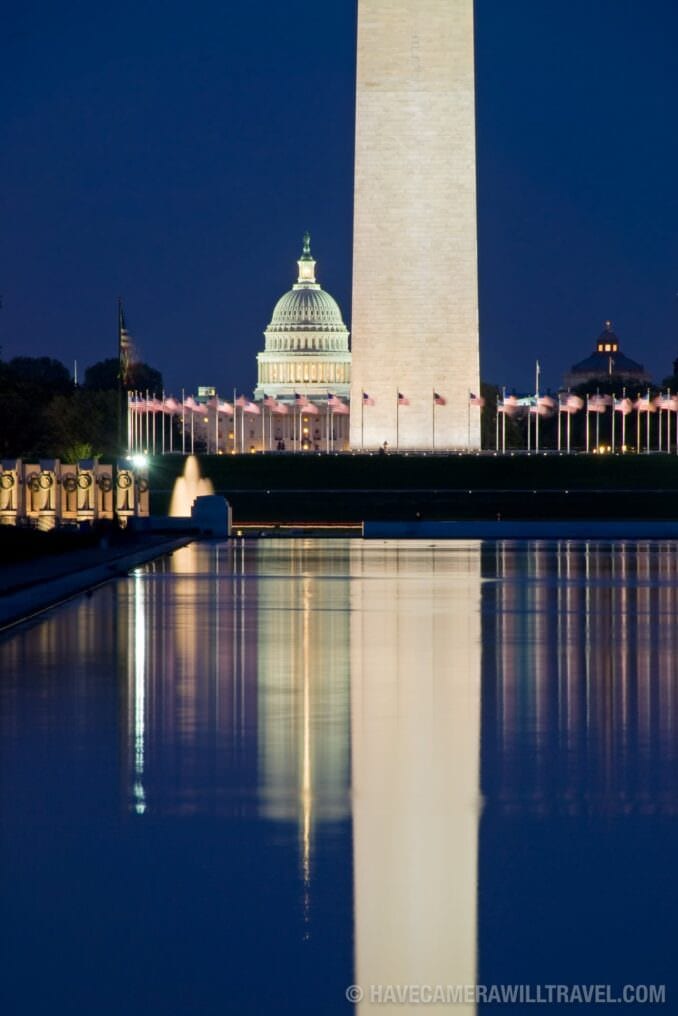 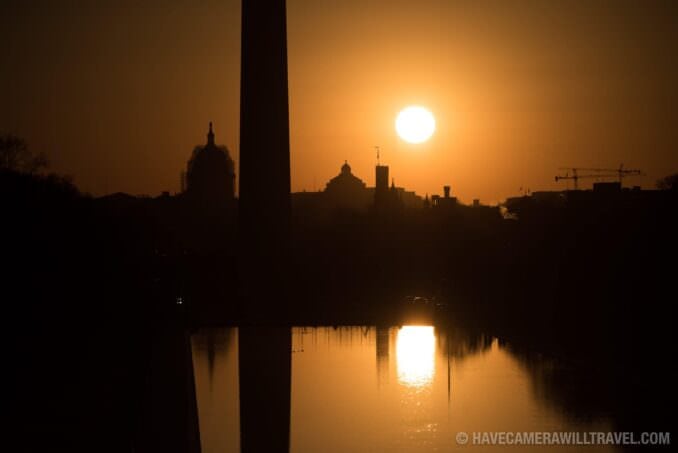 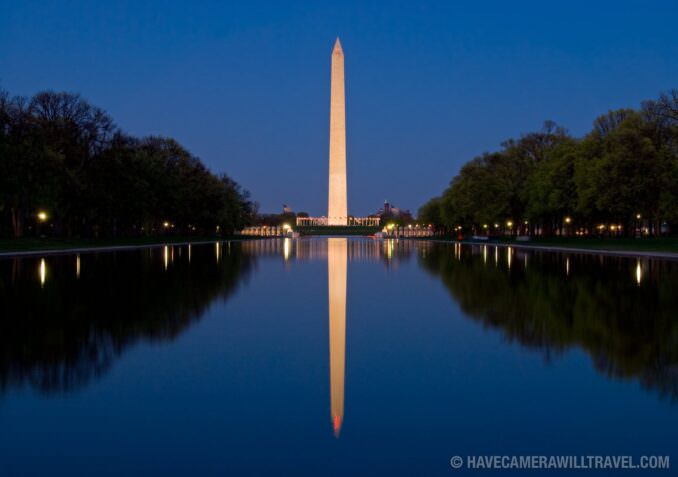 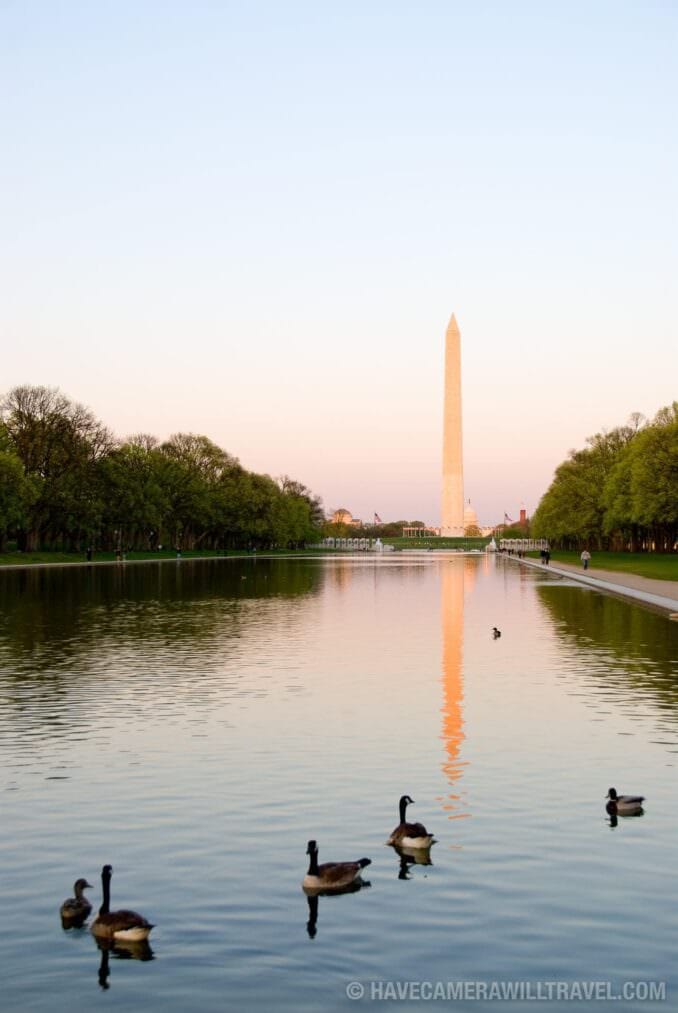 The best way to get to the Reflecting Pool is by Metro. The closest stops are Foggy Bottom (0.8 miles) (Orange and Blue lines), Smithsonian (1.1. miles) (Orange line), Arlington National Cemetery (0.9 miles) (Blue line), or Federal Triangle (1.4 miles) (Orange line). Metro has a handy Trip Planner and here’s a map of the Metro lines.

There isn’t any parking immediately next to the Reflecting Pool, but depending on time of day and how busy it is, it might be possible to find parking along Constitution Avenue. But make careful note of the signs to make sure you don’t get towed. There’s often parking on the southern side of the Reflecting Pool on the waterfront of West Potomac Park all the way out along Hains Point.

Taking Photos at the Reflecting Pool

The Reflecting Pool is accessible at any time of the day or night. There are no restrictions on using a flash so long as you’re not using them with stands.

If you want to take best advantage of the reflections at night, a tripod or some other kind of solid support is a must. You can’t use a tripod on the main steps of the Lincoln Memorial, but there are plenty of places below that and at the other end where you can use one. Occasionally you might come across NPS rangers telling you that you can’t use tripods, but I’ve confirmed directly with NPS headquarters that they are in fact allowed if you’re shooting for personal use (with the common-sense caveat that you’re not creating a tripping hazard). There’s plenty of room at either end to set up a tripod at water level out of the path of pedestrian traffic.

You can find more of my photos of the Lincoln Memorial Reflecting Pool here.