A guide to the what, when, where, and how of taking this photo of richly colored skies behind the Jefferson Memorial in Washington DC before sunrise. 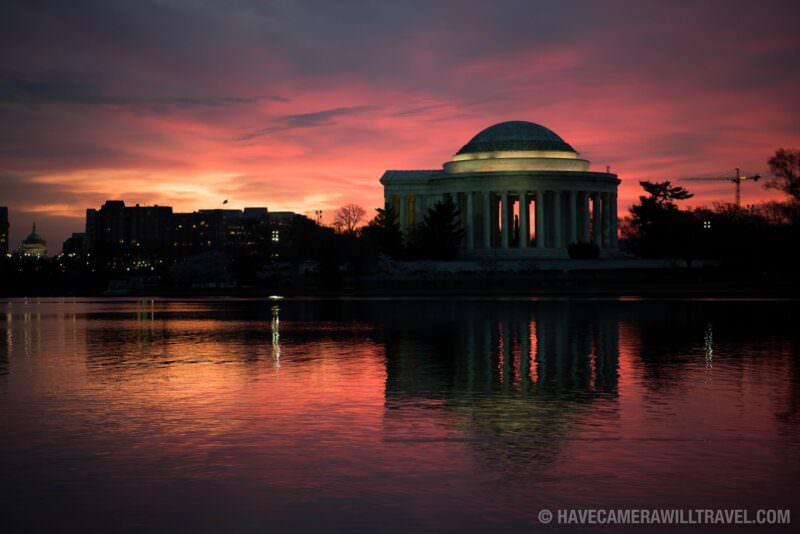 The Jefferson Memorial is a great subject for sunrise shots. Take the perfect proportions of the dome and columns as well as the reflection of the water and line it up with the rising sun, and you’re off and running.

And there’s also room for huge variation. This shot, for instance, is all about the colors in the sky. I’ll be posting soon some other examples from basically the same vantage point that take a different approach.

There’s no magic here–it’s not Photoshopped and hasn’t had the saturation boosted in post-processing, and it’s not HDR. It’s basically straight out of the camera like that.

This is part of a series explaining how some of these photos were taken. If you’re coming in from out of town hoping to take your own photos of Washington DC’s monuments and landmarks, hopefully it’ll give you some ideas and local information that you can put to use in your own photography adventures.

Camera. You’ll want one that gives you control over the exposure settings. That can be in the form of a manual mode or an automatic mode with a camera that has an exposure compensation feature.

Lens. This shot was taken with a focal length of 70mm (on a full-frame camera). To crop more tightly around the memorial and its reflection, you can go up to around 100mm. If you want to draw back for a wider perspective, you can, but often the dramatic sky will then become less prominent in the frame.

Tripod. Optional. I actually took this one hand-held, but a good tripod will give you more room to move with slow shutter speeds and low ISO settings. There’s generally no problem using a tripod from where this was shot–you just might have to stake out your position with other photographers if you’re there during peak cherry blossom time.

This was taken about 15 minutes before sunrise. Much after that and the sky tends to get too washed out and loses the intense color. Waiting for the sun to appear above the horizon also opens some wonderful opportunities that I’ll be covering in another post.

You’re at the mercy of the whims of the sky and weather here, but there are some things to come together:

Light, high clouds. These catch light from the sun before it moves over the horizon. Too many clouds and it turn the scene flat and drab. Too few clouds and you end up without anything to catch the light. Both of those conditions can also make for interesting photos too, of course, but in a different way.

Sunrise behind the Memorial. This particular shot, from directly side-on from the Jefferson Memorial, is taken a few days after the solstice when the sun is rising almost perfectly in the east and setting perfectly in the west. It was in the spring solstice (March), and there’s of course another in the fall (September). If you’re not there within a week or so of those, there’s still quite a lot of room to move along the bank to line up the light from the rising sun behind the Jefferson Memorial–it just might now be perfectly side-on as in this shot, and you won’t be able to get the silhouette of the statue in its center.

Smartphone apps can be invaluable tools in helping you determine exactly where the sun is going to rise. I’ve put together some recommendations for apps to track the sun and moon.

Still conditions. Breeze is going to mess up the reflection on the water. In the right conditions, the Tidal Basin can become an almost perfect mirror. I’ve been there with water that’s even more glasslike than this. There’s actually a very light breeze rippling the water here, but it still works.

This is taken from the bank of the Tidal Basin just to the south of the FDR Memorial. It’s at exactly 90 degrees from the Jefferson Memorial (you can tell because of the way the silhouette of the statue inside the Memorial lines up).

If you come during peak cherry blossom time–which can be right around the time of the spring solstice–you won’t be alone, even well before sunrise. And especially during weekends when the cherry blossoms are out, parking spots can fill up well before the sun’s up. 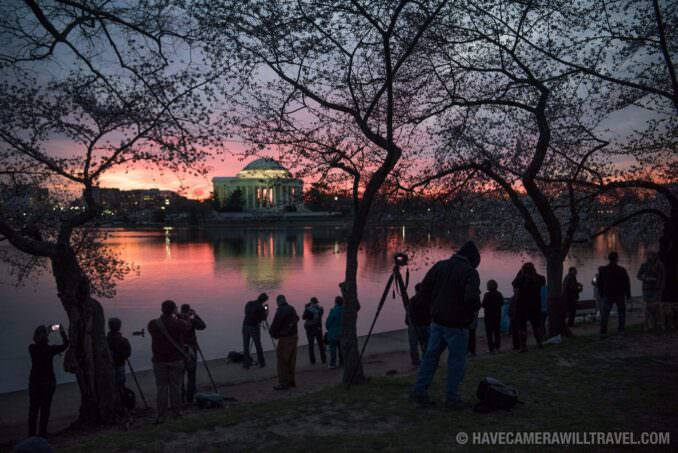 Again, it’s worth pointing out that the rich colors here aren’t from ramping up the saturation in post–it came out of the camera almost identical to this.

The trick to the rich colors–to the extent it’s a trick–is that it’s underexposed compared to what the camera’s light meter wants to do. Underexposing can naturally deepen and saturate the colors, which is an old trick from slide film days.

The built-in light meters in modern cameras are incredibly sophisticated, but they’re aiming for a safe middle ground of exposure. In the vast majority of cases for the majority of users, it’s likely exactly the right choice. But it’s just a guide, and “perfect exposure” is ultimately an entirely subjective thing. Sometimes you want to emphasize something else; in this case I wanted to emphasize the colors in the sky rather than having an evenly lit Jefferson Memorial. So using the exposure compensation function, this one was underexposed by 1 2/3 stops from what the light meter wanted to do. You can accomplish the same thing using manual mode. You simply want to override the built-in light meter or do a spot reading on or near the brightest highlight.

Here’s an example of the same underexposure technique applied even more aggressively, this time of a sunset behind the hills of Athens.

Variations on the Theme

Since it’s all about the sky, there’s endless variety. Here are some more predawn shots at the Jefferson Memorial from the same spot that I’ve taken on different days. Most of them draw on the “trick” to override the built-in light meter to emphasize the predawn colors in the sky rather than using what the light meter calculates to be the “correct” exposure. I also brought them in fairly tightly on the colorful area so that the colors dominate the frame.

I’ve included the focal length for each shot to give an idea of the different framing that different lenses offer of this particular scene. 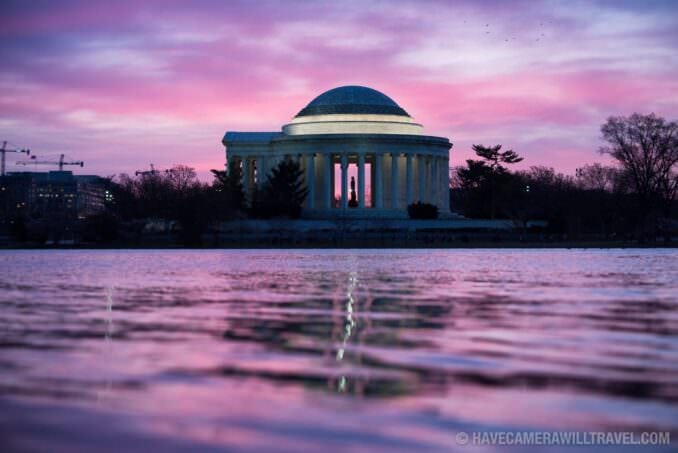 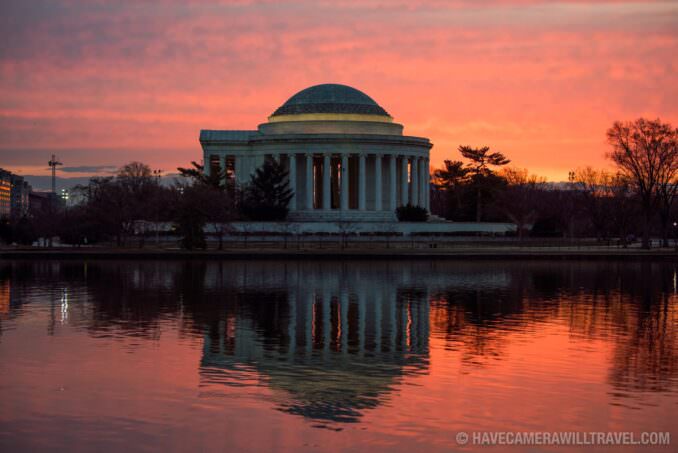 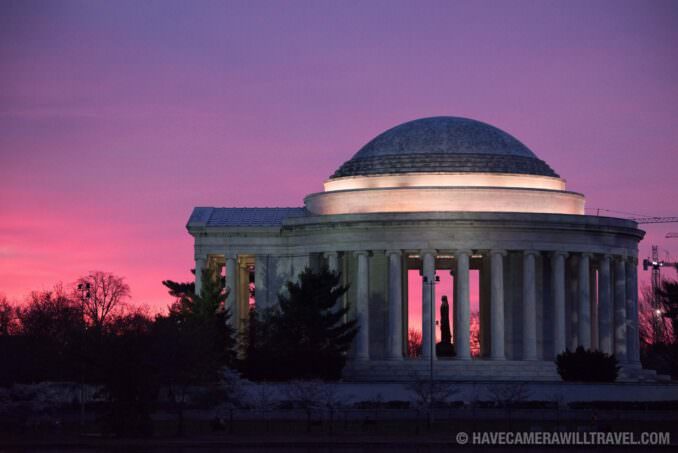 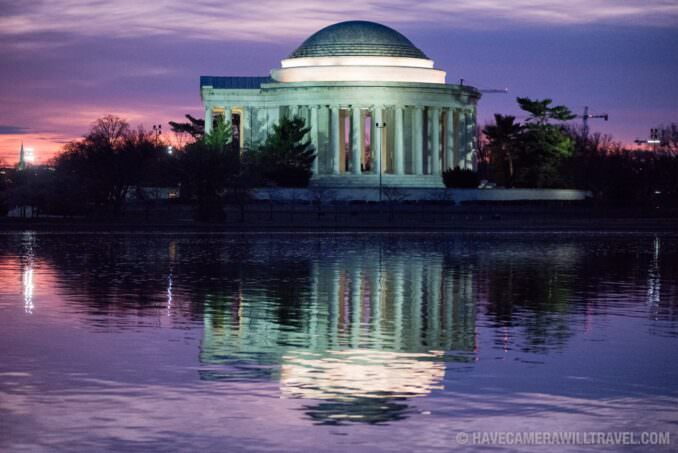 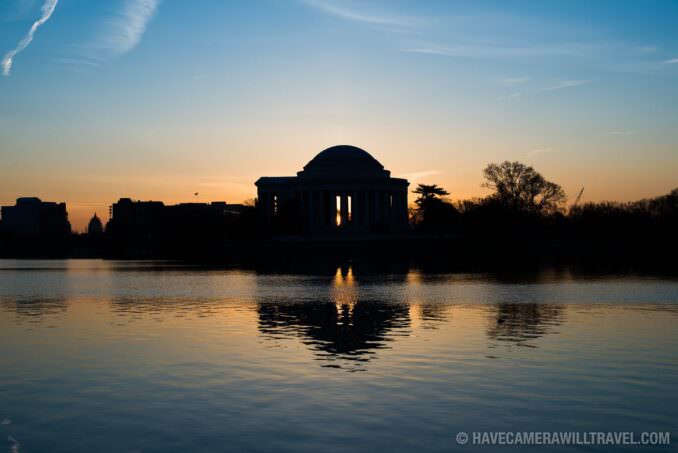 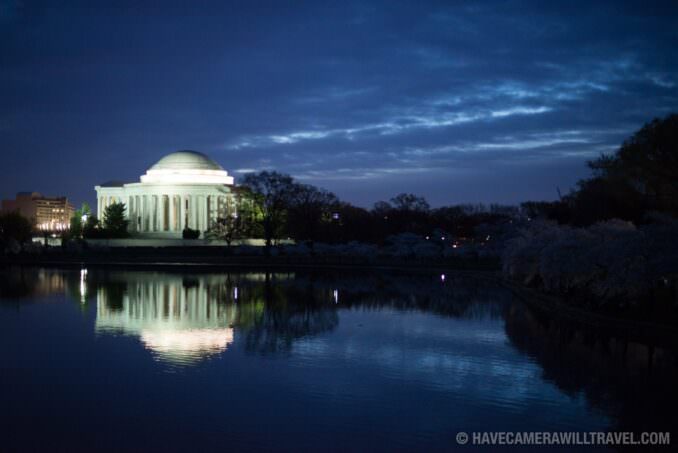 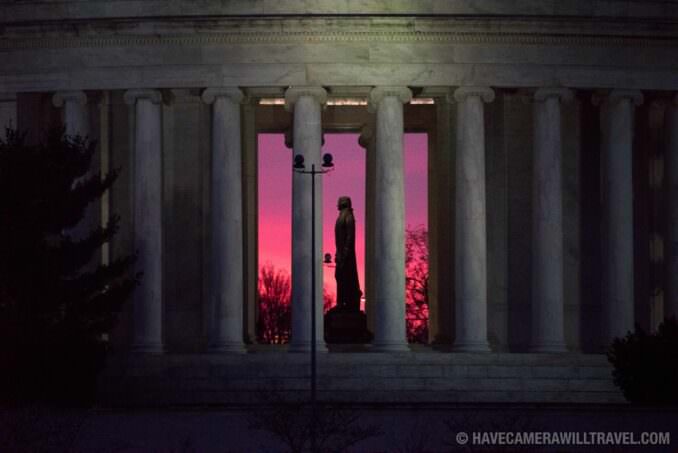 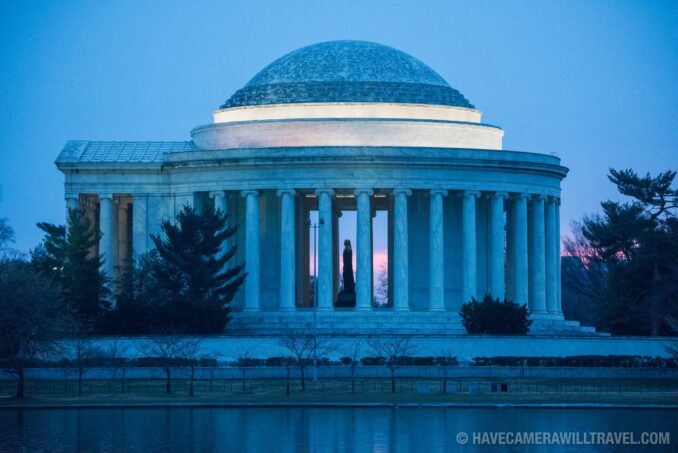 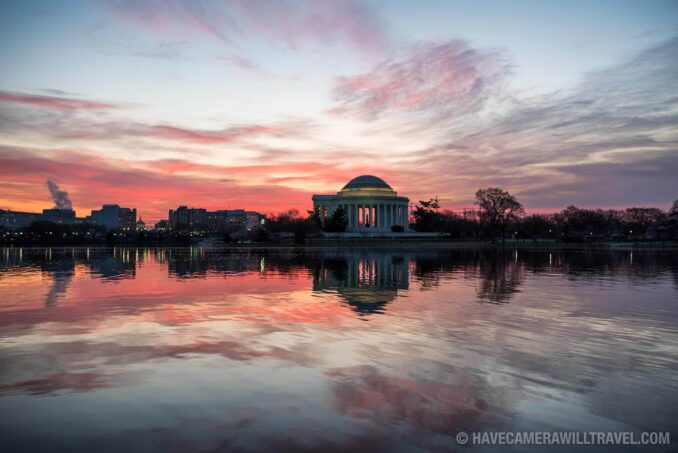