How-to Guide: Jefferson Memorial and Washington Monument through Round Portals

This shot of the Washington Monument and Jefferson Memorial takes advantage of the unusual framing provided by the stone railing of a small bridge at the Tidal Basin. 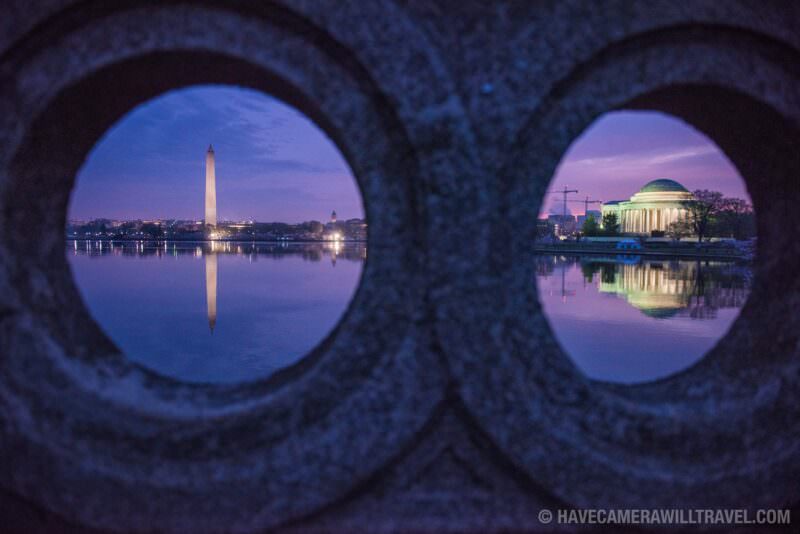 The distinctive thing about this shot that makes it a little different from the usual cityscape of the Washington Monument and Jefferson Memorial is in its framing.

That framing is provided by the round portals in the stone railings of a small bridge near the George Mason Memorial on the southeastern corner of the Tidal Basin.

Using a wide-angle lens you can include two portals that line up, more or less, with the two monuments. You can, of course, do this any time of day, but the water of the Tidal Basin is more likely to be perfectly still at night or very early in the morning, which gives you those nice reflections.

There’s a small bridge on the southeastern corner of the Tidal Basin near the George Mason Memorial.

There are no access restrictions on getting here–it’s accessible any time of day or night. There’s parking nearby along Ohio Drive. 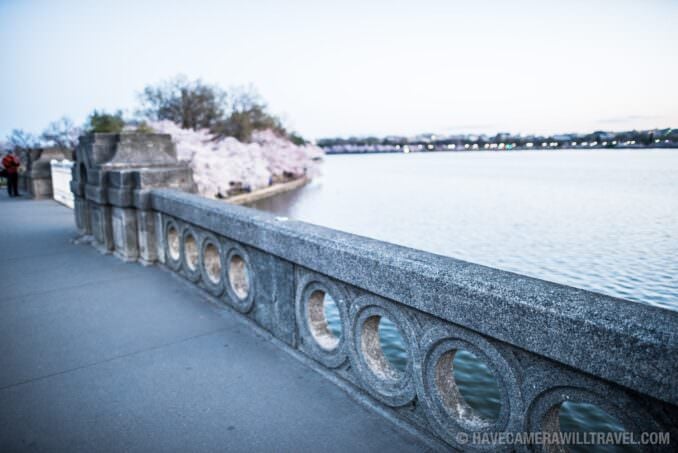 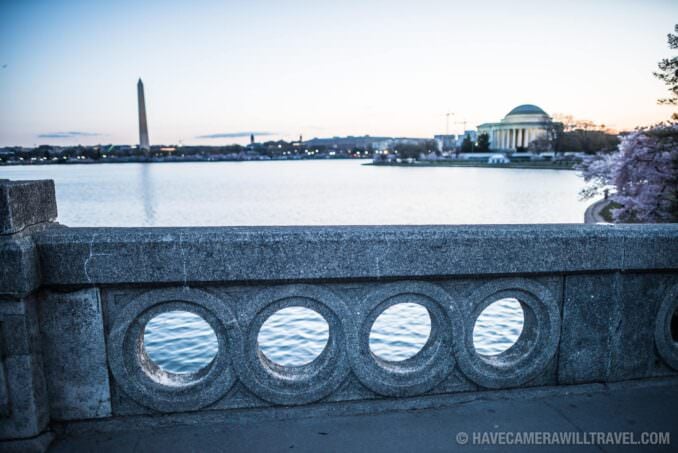 This particular shot was done about half an hour before sunrise, which gives some color to the sky before it gets too washed out from the sun. But you can do variations of it at any time of day.

Aside from lining the shot up, the rest is the same as any other low-light cityscape. Camera light meters will often try to make this much brighter, which washes out the colors and reduces the drama. So you’ll probably want to underexpose this by a couple of stops below what the light meter says.

One other aspect of this that will vary camera to camera is the white balance. Both monuments are obviously lit up. In real life, our eyes adjust to the type of lighting, but to a camera they’re quite green. When you neutralize the lighting on the monuments, therefore, it shifts the sky to that rich purple color. You can override that in post-processing if you like, but I quite like it–it’s what the camera decided with its auto white balance. You can see some similar effects in these shots of the Jefferson Memorial.

But I’ve taken variations on it with a range of different cameras. You can use pretty much any camera to get something similar. To get both monuments lined up in two portals you’ll find it easiest with a wide-angle lens somewhere around 24mm or so. If you only have a longer focal length lens, a good fallback can be to just do one portal for round framing of one of the monuments.

The portals are at about shin height, so if you want to use a tripod or support you’ll need one that allows you to shoot low. It’s also worth using one that doesn’t use too large of a footprint with feet splayed wide because the path isn’t very wide and can get busy at certain times with pedestrians and runners.

This specific shot was taken hand held at a high ISO. A tripod or other support will allow you to do a long exposure or a smaller aperture to bring the stonework into focus as well.

Variation on the Theme

There are a number of different ways you could mix this. Here are some examples using an off-camera flash with a colored gel on the bridge.

How-to Guide: Jefferson Memorial and Washington Monument through Round Portals